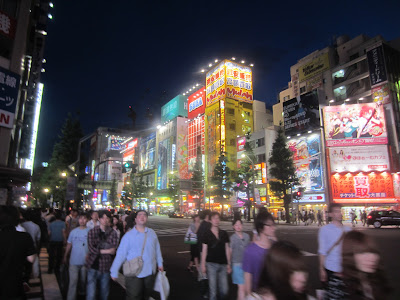 So I’ve been trying to do something awesome every day. It’s pretty exhausting, but I’ve seen a lot of cool things in the area as a result.

So, first off is Akihabara. I went with Ikshu (middle guy), who apparently is a big fan of Anime. For those that don’t know, Akihabara is an anime, manga, and electronic mecca in Tokyo. 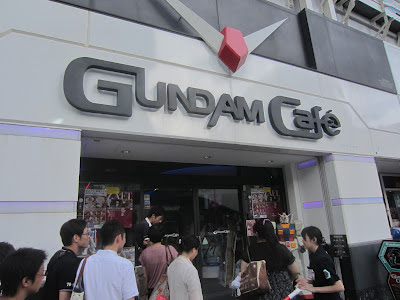 So we met up at the Gundam Cafe after some messing about getting lost at the station. Didn’t end up going in though, the line way way too big. After some bickering about direction, we just sort of followed the crowd. We ended up on this huge street that they close to vehicles on Sunday and of course the first thing we find is a sex shop. 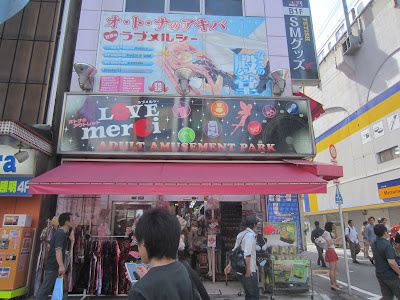 So that was amusing. Equally interesting is the fact that the topmost floors are for guys only, something I’m not sure would fly in the USA. I was mostly interested because at that point in time I wasn’t sure how Japan treated sex. Still not sure but a sex shop isn’t THAT big of a deal. Then again, from what I can tell, it’s mostly used by the significantly large population of single, lonely men. For some reason, there’s a lot of those here, and throughout the day in Akihabara, I could see how anime, manga, porn, etc, were major vices for some of these people, or escape routes.

The way Akihabara (and most of Japan really) is set up is a bunch of semi-tall buildings crowding the street, so to find stuff you gotta head in and start checking things out floor by floor. I didn’t really see anything that interesting to me. I was hoping to find some bleeding edge electronic stuff or maybe some mega cheap used stores. I think those things are there, but we just didn’t manage to find them. We did find a bunch of interesting electronic instruments, like this guitar that I couldn’t figure out how it worked: 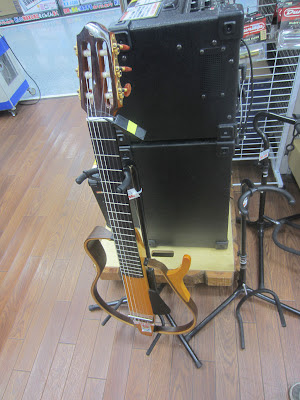 It has no pickups!

And we also found these glasses with an adjustable prescription, the latest in looking goofy technology. 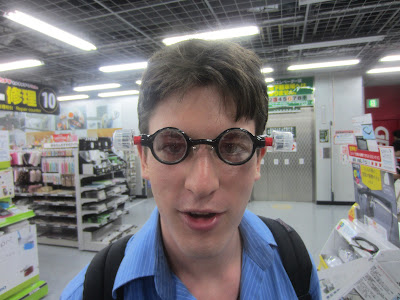 Ate some delicious food that was way huge for the price. Food isn’t too bad here, can get expensive fast, but for some reason I got way more food for the price in Akihabara. And the dessert was awesome.

So the music store we found was part of this huge building, in the top floors of which was the restaurant we ate at. One of the floors was a book store, where we found these two interesting books. Ikshu thought it was just an art thing but I think art imitates culture so now I’m convinced Japan has a rampant uniform fetish going on.  To be honest it would make sense, they have uniforms for everything. Like, the kids at the kindergarten have their “play outside” uniform, their “eating” uniform, and their “transfer to and from the kindergarten” uniform. I think I spent as much time helping kids change as I did teaching them.

Anyway I feel like I didn’t really scrape the surface of Akihabara very well. The most interesting thing was just seeing how far the anime/manga culture goes. There’s figurines for sale that are upwards of 500USD each, and people are buying these things. I wish I had more time to figure this sort of thing out. I pretty much think that all the time here actually. I get more questions than answers.