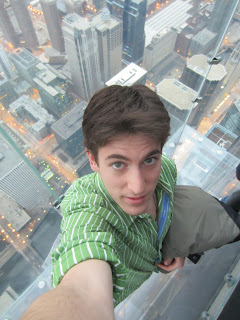 Just after Christmas, I hopped on a plane to O’hare. The mission: Party hard on New Years with Colin and Alex (the guys from China), then infiltrate Wisconsin. Return to Texas with pounds of cheese. In the meantime, do things worth blogging about, and learn the tricks of the new camera. Originally, it was going to be an awesome road trip with about four people, but everyone backed out because snow is just so very scary (and there was OH SO MUCH OF IT). After I opted for a plane, the price tag became too steep for everyone, and so I spent my time in Chicago and Wisconsin dancing a fine line between loneliness and self discovery. Taking pictures of myself was awkward. So travelling alone can sometimes suck, but it did give me much needed time to reflect and think.

I landed in Chicago on Friday. Colin picked me up and we had a fairly uneventful reunion. We’re just too bro for sappy hellos. Our night turned about to be fairly uneventful. I was pretty tired from the day before, in which I packed for Chicago and Princess died. So we pulled a tradition from our time in China and sat around and watched Adventure Time, dozing off occasionally. I justified it by predicting that I would be up all of the next day, New Year’s Eve. I was absolutely right.

Despite some more pessimistic predictions from less-than-mobile friends, Chicago was the place to be for New Years, especially in light of the horror stories I heard about the “fun” times had in Houston (botched dinner party, drunk parents arguing about teacher’s pay, just the usual). Meanwhile, Colin and I started off the night at a friend’s house with a few interesting drinking games involving cards and code-speaking, something Colin and I were pretty bad at. We’re not the most subtle people. After a few gun-shots and schlorps of highly alcoholic chocolate whip cream  we made for downtown Chicago, Colin grumpily accepting the role of DD with a bladder full of Coke after our extended period of card gaming. In spite of this, it was me who nearly wet my pants on the way there, having been suddenly struck by the fullest bladder I have ever experienced in my entire life. At one point, I remember thinking that nothing in the world mattered more than me getting to a bathroom before I popped. The rest of the world took a sort of surreal aspect, and I wryly wondered what would happen if I just exploded pee all over Colin’s car in front of people I had met that night, and was forced to spend my New Years in soaked pants. It was bad. I think it was also the closest I’ve ever been to getting stabbed when I pushed through a crowd of sketchy ghetto black guys chilling in a seedy gas station shouting “Yo homies where the bathroom at?”

Still, we made it to what turned out to be, gasp, a HIPSTER PARTY. 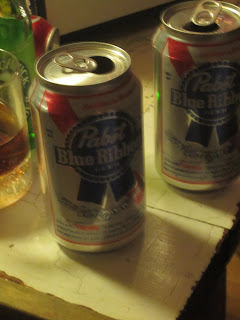 The next few hours were a whirlwind of ironic people dancing in ironic ways to ironic music. I haven’t seen so much plaid in one building since that “dress like a lumberjack day” my highschool had four years ago. I entertained myself by telling everyone that the only food at the party was beer dip and that Caleb from Houston made it. Everyone was so inebriated that I’m pretty sure I told most people at least three times, and they were more excited the more I informed them of the dip’s origin. The night was capped for me when a bunch of guys ironically took a naked bath together: 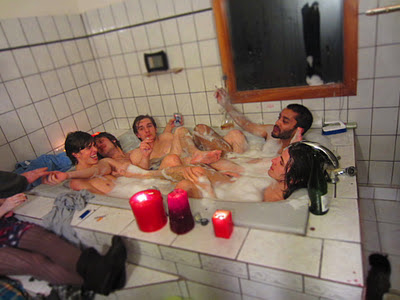 If I were in Houston at this point of a party (5am), it would be about time to curl up in a quiet corner and sleep for several days. However, this was not reasonable to Colin, and he said it was time to find his brother in some unknown part of the city. Rather than hike the three miles through dark alleyways, we opted for a taxi, and Colin drunkenly engaged the taxi driver and got him to regail us with heinous tales of New Years debauchery. Guy was from somewhere in the Middle East and was not prepared for America-level partying. He dropped us off at a classic Chicago downtown neighborhood and we entered a dark two story condo thing. It was dark, everyone was on drugs, I did not have fun. So, we grabbed Colin’s brother and left. This time, though, we decided to hike three miles through dark alleyways. 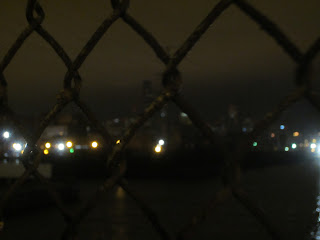 Other side of the river: the safe part of town

We ended up in some weird 1920’s industrial area / holocaust staging grounds. I was tremendously creeped out, but Colin and his brother did not seem at all fazed by our surroundings, so we merrily went along. On the one hand, I was somewhat surprised to not see any hobos, on the other, it was freezing cold out.

So we made it to Colin’s brother’s little shotgun house thing and collapsed asleep, but not before Colin’s bro looked out the window at a car and said, ominously/drunkenly, “damned gangsters.” I’d like to make clear right now that as a student of Creative Writing and Linguistic Anthropology, I have the definite authority to point out the vivid contrast of meaning between “gangsta” and “gangster.” One is funny sometimes, the other is scary all the time. It’s a good thing I was so tired or I never would have slept. Chicago rules.

Part 2: Streets and underground of Chicago, delicious Pizza, Occupy Chicago freezing their asses off (lololol) , and to Wisconsin and back.