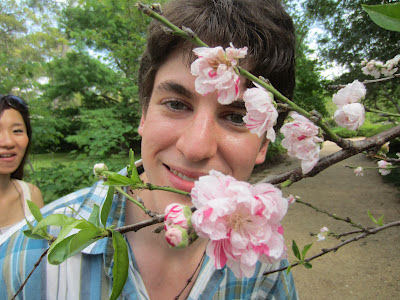 I can be a sensitive guy, dammit!

So Japan fest came and went, and I ended up going both days. The previous weekend I had also helped with cleaning up the Japanese garden in preparation for Japan fest. These events, and the introduction of Umi the Japanese exchange student (seen above left) have made something terrifyingly clear to me:

I am not nearly as good at Japanese as I had thought.

This is a problem, because I am going to Tokyo this summer to work as a kindergarten teacher (幼稚園の先生). So, I have been studying my ass off, and I’ve noticed something. I’m not sure school is the best place to learn a language. All I do in my Japanese class is have unbelievable amounts of vocabulary and grammar structures jammed down my throat, on which I’m tested on so quickly it’s all I can do to barely route memorize it before moving onto the next chapter and immediately forget everything I had already learned. So, how do I rectify this? A few strategies:

1. _Printing out Kanji and vocab and taping it up all over my room. _     This forces me to constantly be thinking about the Kanji, which so far has been the most difficult part of Japanese to learn. Or at least, the most time consuming. While it doesn’t help me write the Kanji, it helps me read it much faster. As for the vocab, it constantly refreshes me, allowing me to keep more vocabulary in the readily-accessible part of my memory, and making my spellings/sayings more accurate. The more I know I know, the more I am capable of conveying in a sentence.

2. Downloading Japanese audio files onto my phone        My Japanese text book comes with a link to a website with a bunch of audio exercises. I downloaded all of them and threw them onto a playlist on my phone. I listen to it between class, while working out, if I’m eating alone, and sometimes even when I go to sleep. I don’t know if it’s working, but at least I’m becoming better at understanding faster-spoken Japanese.

3. Sharedtalk.com    This website is pretty awesome, although it is coded in Flash (try it in IE if it’s not working for you). Basically, it’s a meeting place for people learning languages, set up by Rosetta Stone. So, Japanese people learning English practice their English with me, while I practice my Japanese with them. There’s chatrooms and even a voice chat option, which I’ve been too afraid to try. Props to Cassie for hooking me up with the site, it’s been pretty fun.

So those are my little tricks so far, and yet I still struggle. Meh.

The other day I didn’t really know what to do and Rachel asked what my goal is. I asked if she meant short-term, and she said she wanted to know what I wanted from life. As in, why do I go to school, get good grades, etc. I had to really think about it, and I realized a source of a lot of my confusion is the fact that I don’t really have a long term goal. I have things I want to do (go to Japan, China, drive an expensive car across Europe, give someone a phat scholarship, eat food in an Australian bakery) but no end-game. I don’t want to “be a doctor” or “own a house” or anything set. I have this strange fear of commitment in that sense, as if I don’t want to limit myself to just one thing. It may not be realistic, but I don’t want to be doing one thing for the rest of my life. I guess a dream job for me, in that sense, would be like, I dunno, actor? Secret Agent? Wealthy businessman? So what I realized is that all of my self-motivation, for example, starting to work out every morning, and all my schoolwork (get a 3.5, learn Japanese and Chinese) is just me creating something capable of doing whatever it decides on doing later. Or, capable of doing many things. I’m just acquiring, in the words of Napoleon Dynamite, skillz.

So as to remain feasible, I’m going the way of business, sort of. I’m staying as involved as I can with our AIESEC sales team, calling around local businesses to see if any are interested in hiring international workers through AIESEC. Speaking of, two of our team members each got sales meetings, the first for our LC, so that’s exciting. I’ll be going with sexy Mr. Alex Bui this Friday. Anyway, the plan is to go to Temple University in Tokyo for a second undergrad degree in Communication, then get my masters in business from University of Nottingham, China. After that, I dunno, isn’t that good enough to start doing cool things? Maybe I’ll look into the CIA and be a secret agent anyway.

Oh, and if you haven’t checked him out, Pogo is a badass remixer. He takes soundclips and mashes them into beautiful songs. He started out with movies, and then started his “Remix the World Project,” where he would go to various places in the world, record aspects of their culture, and turn them into incredible mashups. I’ve made a youtube playlist for the lazy, to be found here.  Because of him, I’ve started to mess around in FL Studio. If anybody knows of any great tutorials for it, hit me up, because it is… extensive.