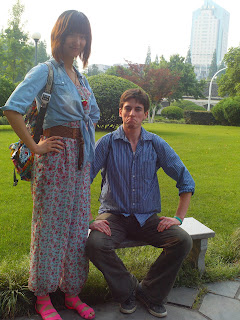 I was given a few days to relax after our trip to Nanjing, and so we’ve been doing various chillax activities around the city, ranging from tours of the local lake, karaoke, clubbing, and hanging out at the mall. We also did a cultural activity and put out an oil fire.

So, starting at immediately post-Nanjing: We decided to go see the new Pirates of the Caribbean. As we sat in the theater, Zoey and Lance suddenly realized the movie could have Chinese dubs, leaving me, Alex, and Ellie to completely flounder. So, the first 30 seconds of the movie were complete suspense. Having the first line in Spanish was a total false relief, we all somewhat cheered to hear “Capitan” but realized it could have just been kept that way for effect, until finally someone speaks English. Qualms about the fourth movie compared to the other three aside, it was nice to just sit and watch an American movie. The whole time, I felt myself hoping the movie wouldn’t end. In the dark movie theater, we were all just a bunch of people enjoying a movie. Outside the theater, I am a celebrity. Alex and I, being white, get constant attention. Also, it’s culturally acceptable to stare, so the attention is obvious. Knowing me, one would think I’d be a sucker for so many eyes on me, but when the movie ended and I was faced with walking out of the theater, I just felt exhausted. Were people only nice to me because I am such a phenomenon? It may be advantageous, but it challenges my own actions. It doesn’t matter what I do, since I have colored eyes, I will be treated a certain way. I think the most interesting thing will be coming back to the States and just being another Joe.

We also got to hang around in the arcade, in which Alex rocked some newfangled DDR. Also, Chinese people love fighting games. There was a whole section devoted to ancient 2d fighting games, and they were all occupied by people of all ages.

Apparently, the bank Ellie had changed money at had messed up the paperwork somehow, and needed to fill something out. She refused to come to them for their mistake, so apparently they sent two staff with the paperwork to the theater, and waited for our movie to get out so Ellie could sign it.

Random factoid: Dogs are allowed everywhere in China. But, leashes are not necessary, and yet, dogs never stray far from their owner’s side. The result is that randomly in a restaurant I will feel something licking my leg and look down to find a small dog begging for food. However, they’re picky, and will only eat certain things you give them! Totally ridiculous.

We had our first days of actual work, which was very revealing. Around 7 we found ourselves at Alex’s community to teach dance. The place was packed. It was incredibly disorganized for about the first 30 minutes. The AIESECers were trying to do weird things, while Alex and I just wanted to start teaching. On top of that, the angry middle aged Chinese women were trying to tell us what to do, in Chinese. We’ve actually been having significant problems with these angry middle aged Chinese women. Anyway, Alex and I finally got it together by ignoring what anyone else said and just doing things our way, and taught the community how to dance. It was great. There was one old guy who was wearing brand new dancing shoes and trying so hard, but was just awful. It was adorable. As for the middle aged Chinese women, they have an idea of what they want to do, and try to make us do that. So, when we have taught every one the waltz, and want to move onto advanced turns and things, the middle aged Chinese will instead want to just practice the basic step. It’s like they could just do the same four steps over and over for 3 hours. I honestly think they would if we let them. It has been very frustrating.

As has been usual, doing the job has given us far more insight to our work than anything an AIESECer has told us. The level of disorganization has been driving me up the wall. I won’t know when I’m presenting on something, be called at 830 and asked where I am when the previous night I was told to be ready by 930, be told to be somewhere at 830 and get there and be told I wasn’t supposed to arrive until 10… it’s been constant, unabated chaos. Thinking about it, I decided that I have two options: Get more and more frustrated and try to fix it, or deal with it. I haven’t been able to decide one way or the other yet.

I’ve noticed that almost every girl here has called themselves fat, which, considering the diet of vegetables, rice, and white meat, is ridiculous. The girls hold an insane bar for beauty here, which seems to be sourced from Western movies and TV shows. However, many of the girls already look like or better than American movie stars, so I don’t understand what is happening. In the US, most girls are aware of the fact that media portrays an unrealistic and materialistic image of women. When I try to explain this concept to Chinese girls, they don’t understand, and simply wonder why they can’t be beautiful like the girls on TV. It’s very sad. I don’t understand it very well yet, and will try to learn more about it.

I’ll keep it short this time. The great news: I went ahead and bought a VPN because I simply can’t take the censorship of my internet anymore. It was getting to the point where I couldn’t access my email, and forget trying to create a presentation about the United States when I can’t even get a picture of Mount Rushmore. So, now I have completely unblocked access to the internet. I’ve thrown a few pictures on facebook already. I hope this goes well. Alex was joking the other day that he was trying to access sites that were blocked on purpose to see what exactly was blocked when the power went out in his apartment only. We’re pretty sure the government doesn’t have THAT level of power, but still.