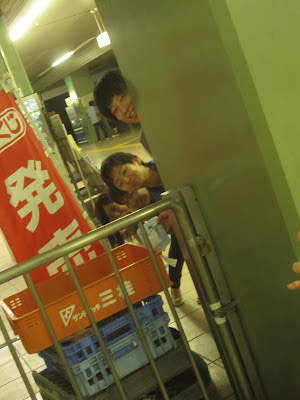 I landed in Tokyo at 4pm, it’s now 1130 and I got to the place I’m crashing for the night about 20 minutes ago, with all my luggage.

Flight was predictably 10 hours of mild discomfort, just enough to keep me awake. At least the plane had a nonworking outlet so I could plug in my laptop. To be fair, they had a bunch of free movies I could watch, so I finally got to see 21 Jump Street and Tower Heist. Not bad for free in-flight movies.

Out of the plane, I met a Canadian girl who must’ve been no more than 5 feet tall. She was a skater for disney on ice. We lost eachother at customs before exchanging contact information. Fail, I bet she had some badass stories.

I also met a Japanese guy on his way to Vietnam for an AIESEC internship. We decided the coincidence was too much to ignore and so we DID exchange contact info, which reminds me that I need to email him.

The ride from the airport to where I’m supposed to live for the next 45 days was grueling. I was fascinated by all the cool new things and culture stuff around me, and conversation with Fumi and Erika, but I had started to feel like puking everywhere. I ended up getting us off at a random stop so I could go to a bathroom and get it over with, but nothing came up. Frustrated but realizing if I couldn’t puke after 15 minutes of trying really hard, I’d probably be safe on the train, even if I did start dryheaving. I could, like, go into a corner of shame and hope people don’t notice my hacking. Didn’t happen though, I just sat in misery, trying to figure out of I had food poisoning or was just hungry. Turned out to be hungry.

Anyway, I’m lugging all my luggage around (HAHA), and around 10 we get to the “shared house” where I"m supposed to stay. Problem is, it’s locked. I had to walk all the way there from the train station, a good 30 minutes with all my crap, and to add insult to injury, the door into the house was at the top of a hyper-steep flight of stairs. I drag my stuff up there and the girls say “sorry, we have to go to the bus station and take you to someone else’s house.” I could’ve cried. Instead, I bought yakitomi: 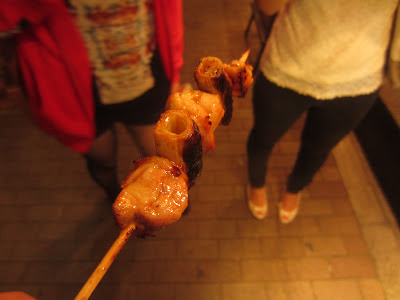 yea it was delicious

I start work on monday wtf