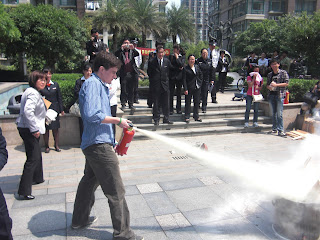 We’ve been spending all week preparing for this in various communities. Basically, many years ago, a poet (or politician? Stories vary) was fed up with the corruption of the government, and so he tied a rock to his leg and ran into the river. The fisherman that saw it happen frantically tried to rescue him, but they couldn’t find him. For days the people of the village went up and down the river in their boats, trying to find the poet’s body, but it was never recovered. For years, then, the people put rice into the river on the anniversary of the poet’s death. Then, one day, the poet appeared to a woman and told her an evil river spirit was eating all the rice, and that the people should wrap the rice in bamboo leaves and tie it shut with 4 different colored strings. So, the traditions are the festival are: Racing the dragon boats, which are big, decorated boats, and also the eating of ZongZu. ZongZu is a stick rice concoction wrapped up in a big bamboo leaf. It’s incredibly delicious but very sticky. Apparently, it’s hard to digest, which makes it great for breakfast because it’ll keep you full. So, we’ve been cooking this nonstop for a week.

It’s very frustrating to learn. For starters, there’s a latent sexism, so every time we cook, someone says to me “Maybe it’s harder for boys than girls.” Of course, I take this as a challenge, and struggle to learn how to fold the bamboo leaves even more so as to prove that sexism is bad and Americans got the whole equality thing right.  However, the Chinese teaching method involves showing me at max speed then handing me a bamboo leaf to try. When I struggle for even a second, they rip it out of my hands and show me again while yelling at me in Chinese. Also each day we did it we were taught a different method, making it pretty impossible to figure out. Despite all of this, it was fun to hang out with a bunch of old Chinese ladies and make traditional food. We also made little pendants that looked like strawberries and filled them with some smelly Chinese herb. Apparently it’s used to ward mosquitoes and evil demon spirits.

We’ve been taken to a lot of festival type things. At each one, there’s been a consistent trend: lipsyncing, communism, and over-dramatization. I’m having a hard time getting the two other videos  I wanted to show up, but I’ll edit this later. The festivals consisted of different kinds of performances, from singing and dancing to magic shows and some sort of opera thing. Thing is, if the performance doesn’t involve a kind of dance, it’s absolutely faked. The songs are lip-synced, the drums aren’t real, and even the plays are pre-recorded. The actors just walk around on stage moving their mouths. When I asked Kyle about this, he said that people are doing it because Chinese people are afraid of failure, and so would rather put on a fake show than possibly mess up. Even the national Dragon Boat festival show, which is something all Chinese people around the world watch every year, is pre-recorded now. He said, though, that people don’t watch it anymore because of this, so even Chinese people dislike the trend. I only wonder what they did before the invention of speakers. Each show also has a strong communist element, with plays where I hear “Mao Zedong” said over and over again. The dramatization I can’t really describe, so I had two videos of it I’ll put up later. In any case though, the strongest example was when we visited a TV station for a “Morality Awards” ceremony. There was a portion devoted to a police detective who died in a car wreck (possibly). They brought out one of his “co-workers,” who began to recite the most obviously acted eulogy I have ever witnessed. Dramatic pauses set to dramatic music while walking around on stage with absolutely rehearsed moves absolutely pointed to a practiced performance. To me, it seemed insulting, until I realized that the whole thing was likely made up, and that it was some sort of morality performance to get people to like the police more. I asked Zoey about it, and she was shocked that I thought it was real. She was sad that that experience was the only thing I took away from the visit to the TV station.

It wasn’t the only thing I took away from the visit. The “President of the City” came to read a speech. He was wearing a casual button down and khaki pants, all wrinkled. He slouched, and read his entire speech off a paper without looking up once, in a entirely uninterested and uninteresting voice. It seemed entirely to me like a guy that stumbled into a job that involves a lot more corrupt maneuvering and a lot less actual political work. This is, of course, a surface impression, but the attitude of the guy was entirely different than one of an elected official in the US. Interestingly, he was elected by the people of Ningbo, as all city presidents are. He, then, elects the provincial president, who elects the country’s president. So, the Chinese people have a very small part to play in the government, but it is so minuscule as to be worthless.

Along with all of these festivals, I attended a fire drill with the residential community that I’m working with. I had no idea what was happening until a few minutes into the event, so when I walked into a room full of uniformed Chinese police officers, I was confused and/or terrified. A fireman gave a speech about fire safety and then we were led outside to practice running from a burning building and putting out a motor oil fire. No joke, they actually had a barrel full of wood, motor oil, and an old oil filter burning right there in the middle of the community, and the firemen just smiled and watched.

Despite some of the fake shows (a fake drum show, really? What’s the point?), it has been very interesting to see this much Chinese culture. As we present to people about American holidays, a subject people are very curious about, they are very excited to show us their holidays. Dragon Boat festival is a very happy time for people here, and the ZongZu can be found everywhere. As I learn more about the culture, I get a better understanding of the Chinese mindset, although I still only have the tiniest idea. The non-phonetic language alone creates an enormous rift between the way of thinking. Added to that is the tonality, rendering our struggles to speak to people hopelessly ridiculous. “We’re going to Fa`n Jia~ng right?” “Sorry, where?” “Fa`n Jia`ng… Fa~n Jia’ng…” etc. It’s frustrating, in that we can only wonder, why don’t they just try variations of the four tones on our phonics? But, since there is no phonetic alphabet in mind when they speak, the tonality is so ingrained, the difference between “Fa`n Jia`ng” and “Fa`n Jia~ng” is comparable to the difference between “Red” and “Scintillating.”

Next will probably be our trip to Shanghai, which I just have arrived back from and need time to reflect on. It is far different than Ningbo, for sure.