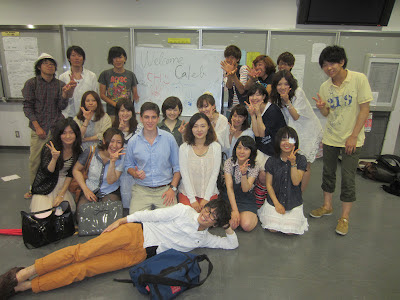 Finally got an internet connection going. It’s only been two days but it feels a lot longer, which I guess is to be expected when I’m not just sitting around watching Game of Thrones while eating raisin bran anymore.

Japan is not as weird or crazy as I’ve always thought it would be. I mean it’s a bit different, but it’s definitely more tame than China. People wear their seatbelts, stop at stoplights, wait for people to exit trains and elevators before entering, don’t spit everywhere, and don’t yell on the phones. The politeness is refreshing, and people are being very helpful when I ask. I’m also not being constantly stared at, and I’m not sure if that’s just because a foreigner isn’t that big of a deal in these parts or if people are just polite. I’m thinking it’s the former, though I’ve only seen about 2 or 3 other non-Japanese people. 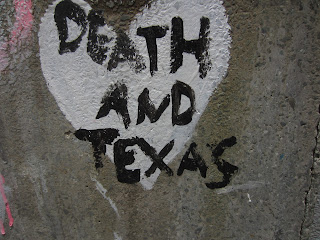 This place is pretty modern, and has a lot more adaptions than the USA. In many ways, this country is far more efficient, intelligent, and moral than the USA is, at least at first glance. I haven’t seen any examples of the sexism that everybody in the USA made sure to tell me is rampant. I also haven’t seen any insane classism. Actually, I haven’t seen a single homeless person, though I’m not sure if that’s because they’re just hiding out in the rural areas or were just arrested. Still, no beggars. Also, I’ve seen more than one disabled person hanging out with friends, living life pretty normally. 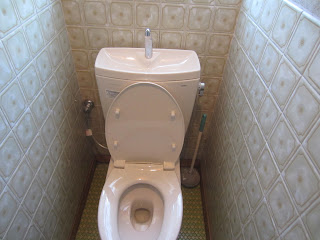 This is a good example of how smart this country is. On top of the toilet is a faucet. When you flush, the faucet refills the tank. This allows you to wash your  hands with that water, saving water that you would use in the sink. Furthermore, the soap you use will go into the tank, keeping the toilet clean and smelling nice. Genius.

One thing that surprised me is that despite the fact that these people are very clean, oftentimes there’s no soap in bathrooms. Train station bathrooms have it, but the Chuo university bathrooms usually don’t. When that happened once and I pulled out my hand sanitizer, the two girls I were with had no idea what it was. I squirted some onto their hands and they made for the nearby sink. So, hand sanitizer is a totally foreign concept, which shocks me because it seems like a pretty Japanese thing. You can get cute little bottles with cute little carriers and all kinds of smells and it makes you smell good… nope. So, business friends, here’s a wide open market.

Japanese internet is pretty much blazing fast. While typing this all up, I’ve been uploading pictures at a rate of like 100 in less than a minute. It takes something like 5 minutes to do that in the US. 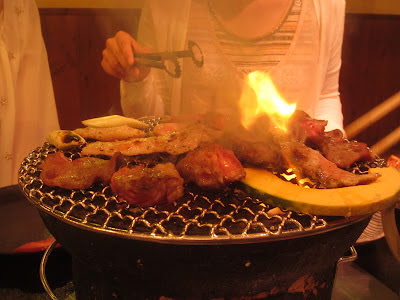 So this was pretty interesting. It’s basically a table to table BBQ. They bring out this ridiculously hot grill and you put various meats on it. I had cow’s tongue and intestine for the first time. The tongue tasted like steak and the intestine had this weird sweet taste. Not really like beef at all. Super weird. Anyway it was totes fun, all the ICXers got together and had a great time. I tried to teach Fumi to say “Very fast” which is literally impossible for a Japanese person since they have no “v” “r” or “f” sound. Hilarious. 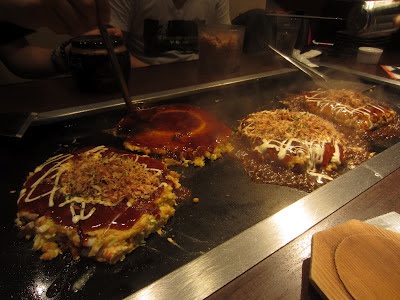 This is another “do it yourself” kind of food. They give you this big bowl of gruel (cabbage and lettuce and stuff), you slap it onto the grill, then grill it and decorate it with sauce and stuff. It was pretty delicious. 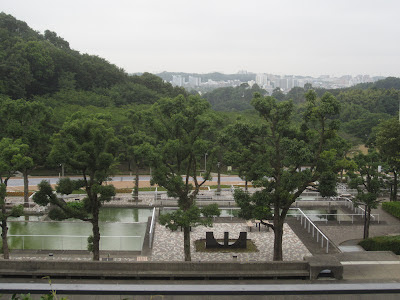 There’s this AIESEC thing where when you bring in an intern, you give them a tour of your university. While it’s always interesting to see a foreign university, these end up usually being pretty boring. The Chuo LC made it awesome. Nozomu had a bunch of pictures of random places around the university, which he sent in an email to everybody. He had some point system set up based on the difficulty of figuring out where each picture was, split us up into teams of 4, and sent us off to find where each thing was. It was a really fun way to check out the university, which is beautiful. 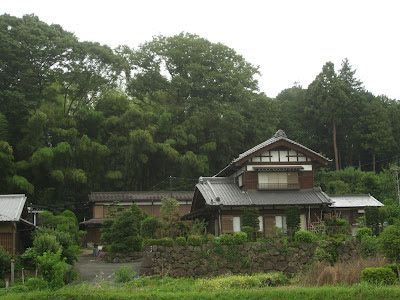 It’s in this really rural area, and the houses around it have lots of space for gardens and rice fields. I asked Ryokei if the people were farmers, and he said probably not. Since they had all that land, if they didn’t put a garden or rice field on it, they would have to pay an enormous tax. Pretty smart way to get people not to waste land in a nation somewhat lacking land. Then again, I’m not so sure I believe that Japan has a land problem at all. Maybe Tokyo is crowded, but out here in Hachioji, which from what I understand is a mere 1 hour train ride from downtown, there are vast swaths of unused space, and all of the apartment buildings are usually pretty short. Also, there’s lots of single-family homes everywhere. This cityscape still has lots of room for massive expansion. 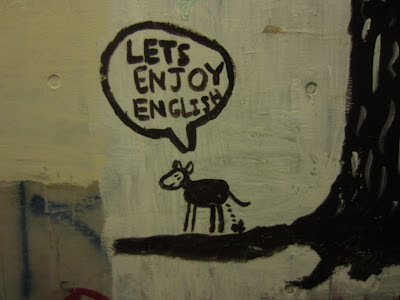 My favorite part of the tour was the building that everybody called “The Crazy Building” in English. As far as I can tell, it was the club building, and it was absolutely trashed. I’ll just let the pics speak for themselves: 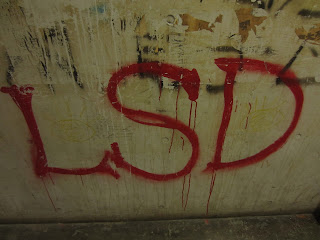 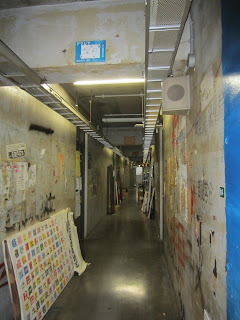 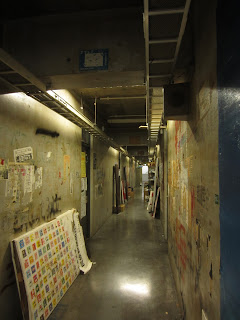 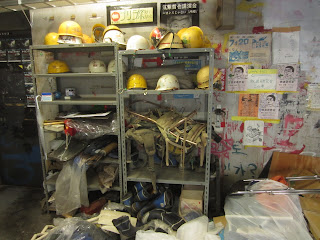 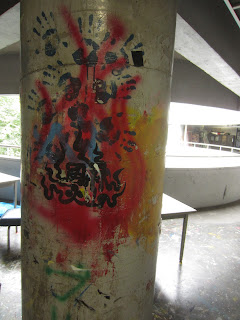 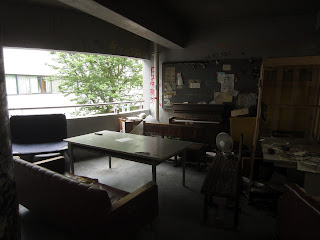 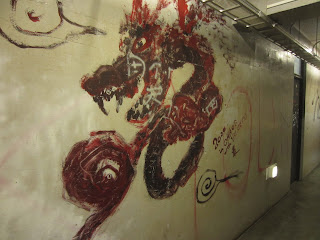 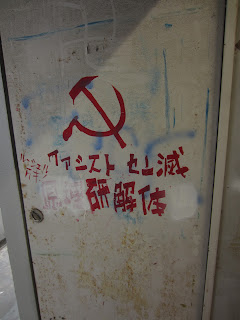 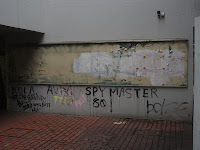 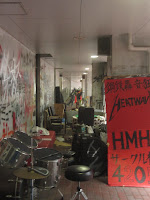 I was so excited by this building because it went against every preconception I had about Japan up to that point. It was messy, disorganized, filthy, and expressive. It was one giant tattoo, and Japanese people hate tattoos. I’ve seen one person with one. There’s a couple of fringe people around, but nobody at the university, or in this building, seemed very fringe. It seemed like the ultimate go-nuts place. There was a band rocking out in a room, competing with the swing orchestra upstairs, and some guy on a violin sitting in a chair near the stairs playing a hyper-high note on a violin over and over. Nobody I was with liked the building very much. As I learn more about the Japanese people, I feel like this will be important.

I think that’s enough for now, so I’ll end with this guy: 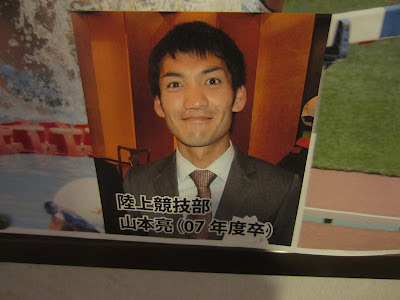