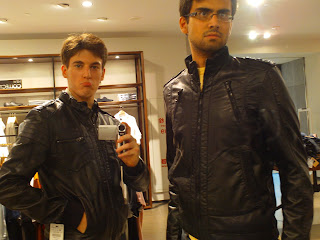 The Red Wings project is over, and I have started teaching at a foreign language training school called “Cambridge Language School.” The school has set me up with a fantastic paycheck and housed me for free in the best apartment complex in Ningbo. I live here with four other teachers: Colin from Chicago, Nazir from Canada, Sylvia from Mozambique, and Lena from Germany. Meteor, my girlfriend, also stays with us occasionally.

The apartment is absolutely fantastic. We’re on the 22nd floor and have two balconies providing wide views of the city. It’s my first time seeing the city from so high up since the flight, and it’s a revealing view. Some days, it’s clear enough to see all the way to the mountains surrounding the city. Other days, smog chokes the city so much that I can’t even see across the river. We’re so high up that we can see the sunrise and sunset, especially if we climb to the roof. We have found that we can access the absolute top of the roof if we get up in boiler rooms and navigate through complicated pipe systems. It’s hot and dirty work, but well worth it.

The apartment has a mini bar, which is amazing, and also a kitchen with a single electric stove and a fridge. No microwave or oven, however, which severely limits our cooking options. We’ve had to fry a lot of things, but I did manage to make French Toast once, which was great. I think my favorite part of the apartment is toilet shower. The second bathroom used to just be a shower, but then one day we left for an hour and came back to find that a toilet had been installed in it. Somewhere in Ningbo, there is a toilet Ninja.

For the new job, I teach kids around age 12-15. Originally, I was to teach phonetics and vocabulary to smaller children, but when the office discovered that I am a Creative Writing major, they decided to give me more advanced classes, where I teach “English for Academic Purposes.” I was going to teach about essay writing and all that other fun stuff, but was instead suggested to focus more on culture and history. So, basically, I get to spend half of every day teaching whatever I want about America, be it political, historical, philosophical, or cultural. It is a dream job, and my kids are mostly great. However, I have run into some problems dealing with the Chinese learning style.

In Chinese schools, a teacher will drone on for about an hour, occasionally writing things on the board. After a while, he or she will review everything that was just lectured on, and then continue. There is no discussion or questioning, or indeed any sort of student participation whatsoever. For someone studying a liberal-arts degree in a relatively small University where Socratic discussion is promoted, it has been extremely difficult for me to deal with the blank stares of twenty pairs of brown eyes. I have been slowly getting them accustomed to a more open-ended type class. Methods include starting class by making my students shout, stand on their desks, wave their arms, and pretend to be cowboys and shoot eachother. Some sort of warmup activity usually gets them to talk a bit more, but I have never really gotten them to ask questions like I want. I could talk insanely fast, or trudgingly slow, and they will never ask me to repeat myself. This clearly means they aren’t really paying that much attention, and if they are, they aren’t learning anything. If I ask them “do you understand,” they’ll just stare at me and finally someone might say “Sorry, can you say that again?”

The whole Chinese system is somewhat depressing. When I first came here, I would always ask students what they’re studying. I quickly learned that the answer would be some variation of “Business,” and the follow-up question, “Oh, you must really like finance!” would always be “Not really. My parents just want me to.”

Bringing up anything cross-Asian-cultural has been disastrous. My students firmly believe that Tibet is full of dirty people, Taiwan is a part of China, and that Japan is the worst country in the world. Their arguments for why Japan is just about the most horrible place in the world were extensive, perhaps never-ending: Japanese people are selfish, Japanese culture is just a copy of Chinese culture, Japanese government hides things from it’s people, Japanese people killed Chinese people 70/100/500/2000 years ago, and so on. I asked the students what they thought of Hitler convincing everyone that the Jews were bad, and my students said it was terrible. They didn’t understand the connection, and when I tried to steer them in that direction, they became furious with me and tried to convince me of how evil Japan is, citing things like Pearl Harbor in an attempt to pull me onto their side. I had always thought that the rest of the world must be incredibly xenophilic, since everyone mocked US racism, but I haven’t encountered such blatant xenophobia since the few years I lived in South Carolina.

I’ve had the chance to meet a few interesting characters here. Frank is Lance’s English teacher, and from him I got a much better understanding of how older Chinese people view the PRC. Frank is one of the top English teachers in Ningbo, and is apparently sought after by most of the politicians here. He only takes students who are passionate about learning English, and so his track record in terms of student scores is top-class. He lived in Canada for four so he could become a Canadian citizen. He said it was for stability. “Throughout the history of China, Dynasties would rise and then fall. There would be a string of good emperors, and then one bad emperor who only cared about his own pleasure. Then, the Dynasty would fall. Modern China is ruled by very few mysterious people. It is only a matter of time before the government changes again. So, many rich people in Ningbo send their children abroad to get foreign citizenships. Even the politicians do this, because they know that China is not stable.” However, he did not like to talk about politics, a topic he learned to avoid by hanging around politicians a lot. “They don’t like to talk about those sorts of things. It is so mysterious anyway, why bother? Nobody knows where the people are that run the country, and we have no way to influence them, so there is no point in talking about it.” I haven’t been able to agree with that sort of mindset, but I can see his point. Also interesting was his pointing out that we lived in the richest part of Ningbo. “Everyone knows ‘Central Garden.’ It is where all of the politicians live.” So, the mayor of the city could be my neighbor. That’s pretty awesome.

We are set up here in the best of ways. Whenever we go out, we’re treated like celebrities. It’s going to be difficult to return to the US and just be another regular guy. Whenever we go to bars, we get free drinks. At clubs, we get in for free, and everyone wants to dance with us. People always want to take pictures with us. Sometimes we’re a bigger attraction than the actual tourist location we’re at. All of this combined with the fact that everything is so cheap here makes me feel like I’m getting a taste of the high life, and it’s pretty sweet.