I finally have time to make a packlist blogpost. If you aren’t familiar with the onebag community, this post will seem super weird. Just know that we love looking at people’s packlists. Why? Hard to say. I guess perhaps it’s the same reason some people like fantasy football, and talking about what trades various football teams should make, and speculating how certain games would go if coaches had put in x or y players. In our world, it’s observing what gear other people brought into certain scenarios, and thinking about how we might have done it differently, or learning from other people’s experiences what gear worked well in what situations.

Ah, and if you aren’t familiar with the concept of “onebag” at all, know that it’s essentially the idea of traveling with just one bag. There’s flexibility in the definition and among the community, but it all revolves around realizing, after a great many trips, that 90% of the shit you’ve been dragging around the world you didn’t actually need, and finding ways to reduce down to the barest of essentials. A sort of minimalist movement. Thought oftenttimes it’s a quite privileged movement, filled with people (like me) who have a large amount of disposable income and use it to get high-quality, durable, long-lasting, and lightweight gear. Though there is a fun angle in trying to find cheaper gear as well. Reduce, reduce, reduce.

I only give such a long introduction because I think I might have time to make a couple more of these packlist posts before covid ends and I start racking up more trips and thus start extending my backlog of unposted packlists again, and since normally this blog is about, like, programming and emacs and bootcamps and stuff, I want to add some clarity.

The trip was a quick weekender to Yilan. Well, more specifically, the sort of smaller sister town of Toucheng. When the country isn’t shut down due to COVID-19, Yilan and the surrounding townships are great for beaches, hot springs, whiskey (the Kavalan brewery is there), and more niche Taiwanese food. Our trip was more about just kinda vibing, since the tourist stuff was all closed. We got there via motorcycle, so had to pack especially light, because I don’t yet have an attached box for my bike. 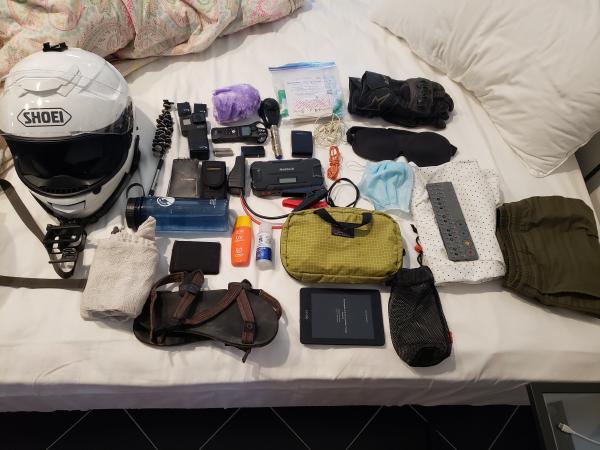 I’ll start top-left, sort of. Note, I can’t be fuckin bothered to set up affiliate links, so links are just links.

The helmet is a Shoei GT-Air ii, which I got because it has the absolutely required-for-Taiwan internal sunshield. Kinda wish it had a bit more ventilation though. Equipment on the helmet includes a Sena mount and module, which allows a bluetooth connection to my phone and in-helmet communication with Tammy, also basically required for 2up riding or whoever you’ve got on the back just sort of becomes this dangly blob, and you have no idea if they have to pee or whatever, unless they start kicking. The Gopro chin mount I unfortunately can’t find the manufacturer of, but I’m not sure I would recommend it as now it seems there’s much smaller, more minimalist chin mounts available. There’s also a Gopro brand mount stuck on the top, which sometimes I use for a rear-facing camera.

Next to the helmet is a Joby Gorillapod that I’ve had for like a decade. Great for all sorts of shit, but when I’m motorcycling I use it to mount the Zoom H1n, which is the microphone underneath the fuzzy purple blob, on my motorcycle near the exhaust. My backlog of motorcycle footage is huge, so I haven’t gotten up to the point where I started recording audio from my exhaust with a dedicated mic, but due to the excessive wind noise recorded by my gopro in my other motorcycle videos, I’m looking forward to using that footage.

The Gopro next to the gorillapod is a Hero 7 Black, with a battery charger and two extra batteries. Because I record in 1440p (or Gopro’s wide-angle equivalent), I only get about an hour to an hour and a half of footage on a battery. So, during rides, I’m charging two batteries on the charger while draining one in the Gopro.

The purple puff thing is a homemade wind protector for the Zoom H1n. It looks ridiculous but it works great. We don’t have Amazon out here so it’s sometimes easier to just make stuff like that.

To the right of the microphone is a Lumintop mini flashlight. Has a couple brightness modes and a strobe, which has become a required bit of kit when I ride due to the couple of times it’s completely saved my ass when I need to get traffic away from something in the middle of the road (a crashed bike, or an injured dog, that kind of thing). Inside is a micro-usb rechargeable AA that came with the thing.

Above the flashlight is the Sena module.

The ziploc bag just has some basic first aid stuff, like gauze, bandaids, some painkillers, etc. I also keep my International Driver’s License in there, because it’s just a paper book that would get utterly ruined in the rain. Fun fact: you need to have a <250cc motorcycle license for a year before you’re eligible to apply for the >250cc license in Taiwan, but you can get around that by having an International Driver’s License with an M certification. It’s valid for one year, and so as a foreigner, we can ride red plates (>500cc) bikes uninterrupted from the day we land :)

Underneath are some generic wired headphones, good for reviewing audio on the Zoom or for when I’m fiddling with my OPZ.

Top-right are my Alpinestar leather gauntlets, which are I think 5 or 6 years old now and probably need replacing. Below them is a generic cloth eye mask that is an essential bit of kit for sleeping. Pop that on and I can sleep literally anywhere.

Back to the left, Zebra F301 ballpoint pen for starters, which is the best beater ballpoint pen. Yee I’m a pen nerd but when you need a pen that will just work, and won’t explode in your bag, this is the one. Next to it is a Mnemosyne pocket-sized notebook, which is great to carry around in Taiwan because tourist destinations have stamp pads, so I can collect stamps in it!

Right of the notebook is a Leatherman Signal, which I rarely use, but the times I have used it, I would have been totally shit out of luck without it.

Right of the Leatherman is the coolest thing Tammy’s ever gotten me, a Nekteck portable battery charger and jumpstarter. It’s a fuckhuge battery that I mostly use to charge my gopro on rides, but also has a flashlight, and can, incredibly, jumpstart my motorcycle if the battery dies. The times that I’ve used that feature were, similar to the times I needed the Leatherman, times I would have truly been SOL without it. Incredibly handy.

Right of that are some generic USB and USB C cables. Also, the ubiquitous mask. Out here surgical masks are more popular than cloth ones, because I’ve been told they consider them cleaner. I find they’re much better to wear under the motorcycle helmet, which, yes, is a requirement out here. Frustrating at first, though hindsight, I think the government just wanted to have a simple “if not in house, mask on” rule to eliminate any confusion. In the end, not so bad.

Right of that is a generic uniqlo button-down that Tammy made me bring so we could pretend to have a fancy dinner on our hotel balcony, and on that is the supremely awesome Teenage Engineering OP-Z. It’s an incredibly powerful sequencer, synthesizer, sampler, and even performance instrument that, once you learn how to use it, can make some wild beats. It’s so small and light I basically just carry it around everywhere. Right of that are some generic Uniqlo shorts, as I wear jeans when riding and I wasn’t about to walk around Yilan all day in 35C weather in jeans.

Back to the left, the water bottle is a Hilltop 500ml bottle, which is made in Taiwan, so I love it automatically :) I used to be a champion of Platypus plastic water bottles because of how portable and packable they are, but after having them explode on me time and time again I just can’t deal with them anymore. You basically have to replace them once every two months just to be safe.

Below the water bottle is the best wallet I’ve ever had, a Slimfold. I’ve had that one for about four years now and it’s in perfect shape, having come all over the world with me.

Right of that is generic sunscreen and hand sanitizer, and then the green bag is a Tom Bihn Spiff Kit, which is my bathroom bag. Tom Bihn stuff is hella expensive, but to be fair, it’s over engineered, lightweight, and durable. I’ve had all my Tom Binh stuff for 5 years now and it’s all in pretty much perfect shape.

Back on the left is a linen waffle-print towel, from some random seller on Etsy. This is a classic onebag recommendation, as linen towels soak up tons of water, wring out nearly dry, air dry quickly, are odor-resistant, and pack very small.

The sandals are by Xero, who, alongside Bedrock, make the best sandals. I used to be a part of the Vibram 5-finger fan club, but those aren’t as versatile (or fashionable lol) as a good pair of sandals. I’ve traveled all over with these things, as they’re very grippy, light, pack well, and don’t look too shabby as far as sandals go. In our 2016 Taiwan trip those were basically all I wore for several days of walking many tens of kilometers and my feet felt fine after, to give an idea of how dope they are.

Right of the sandals is a kindle paperwhite… something. The waterproof one. I use koreader on it rather than the default kindle software.

Right of that is some generic webbed bag that’s great for stuffing shit, or as a loose-items beach bag. 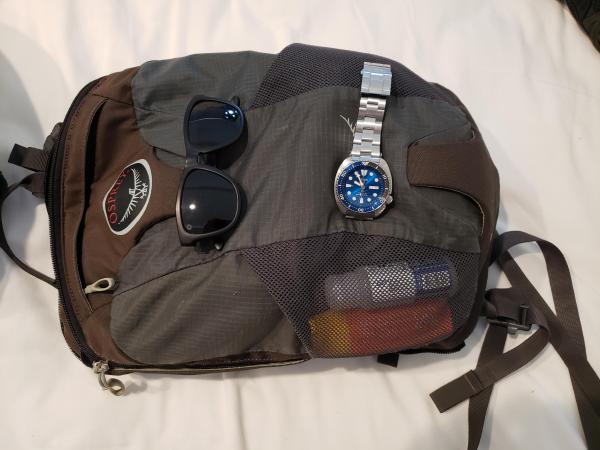 Here it is all packed up! The bag is the day bag that comes with the Osprey I think Farpoint? I’ve had it for seven years and it’s in perfect shape, even after being dragged across Vietnam on the back of a motorcycle and through countless hikes. For a short couple day trip where I don’t need my laptop it’s perfect, though on longer trips I’ve got a Tom Bihn.

The sunglasses are Knockaround. Good quality, lightweight, affordable polarized sunglasses that are cheap enough to where you don’t worry if they get dropped, stolen, or destroyed somehow. Never understood paying more than fifty bucks for a pair of sunglasses. I go through about a pair of these a year.

The watch is a modded Seiko Turtle. I swapped the crystal on it and tossed on a heavier-duty bracelet than the one it comes with, though I can’t remember who makes the bracelet, and strangely, it’s unbranded.

I’m wearing a pair of jeans, some excellent hybrid leather motorcycle / casual-wear boots, and a necessary bit of uniqlo kit: an airism tshirt. If I didn’t have that I’d just ride shirtless under my leather jacket, because the alternative is dying of heatstroke on the back of my bike.

Not pictured is an extra pair of underwear, also from the uniqlo airism line I believe. Washes easily in the hotel sink, dries within a couple hours.