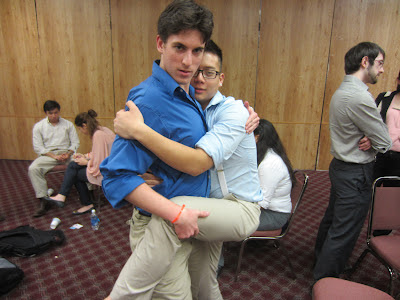 First: News. I got a job in Japan for the summer. Starts in June, lasts about 6-7 weeks. I’m pretty excited. I’ll be teaching kindergarten, ages 4-7. It’s in Tokyo.

AIESEC had a regional conference in Beaumont (Boremont) and I went. It was fantastic. Basically, a conference is when AIESEC chapters (LCs) of a region’s universities (we are MoTexCoKs) all get together to learn stuff (party). It’s sold as an event at which one will meet awesome people, learn a lot about AIESEC and whatever one’s role at AIESEC is, become a lot more enthused about AIESEC stuff, and have a great time. Usually I’m not convinced by those sorts of things but AIESEC has been a sort of trend setter in terms of destruction of my cynicism. In fact, I’ve been surprised time and time again by it’s dedication to maintaining a positive image and atmosphere. For example, when we first arrived at the hotel in the middle of Egypt - sorry, Beaumont - one of the steps in the sign-in process was an ID check. They gave us little zip ties (orange thing on my wrist in the pic above) that determined one’s age. If you didn’t have the right one, you weren’t to drink, end of story. Of course, the thing about zip ties is they can only tighten, so if you had an itch and scratched the wrong way, there goes hand circulation. Anyway, still impressive self-control.

We started the first night with an sort of explanation of what would be happening at the conference. They dropped some pretty depressing statistics about how poorly our region was doing compared to others. By the end of that presentation, I was feeling pretty pumped about getting our LC on track. That was a sort of theme of the conference: getting shit done. Actually, I think the theme was literally: JFDI, or, Just Fucking Do It.

First party of the conference: South of the Border 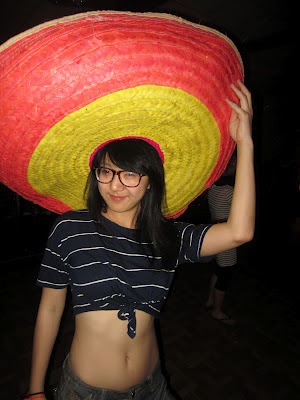 Great time. The hotel gave let us party in the conference room all night, with basically no noise restrictions. For some reason, not as many people turned up as I had thought would, but it was still fun. Quick aside: All of AIESEC Dallas is Asian, and one Russian. When I asked them why, they said “Well, Americans applied…” Anyway, I got called out hardcore on my yellow fever. Great times. I forgot to bring Twister, but I did do that thing I’m starting to do at parties, where I take something and put it on a bunch of different people and take pictures of them, as candidly as I can. In this case,  it was that giant sombrero pictured above. Here’s a link to the set of people I captured. Like I said, candid. I think Danny wins the “quick you’re having a photo taken of you wearing this giant sombrero do something cool” contest: 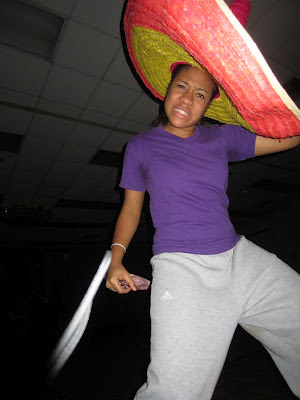 The next day it was wake up early and get to your respective team’s meeting. I somehow managed to wake up, shower, and make it downstairs in time to chow on something like 5 hardboiled eggs in an attempt to make it to lunch without feeling the rumblies. Protein, right? Anyway, we were in that room for about 8 hours straight, with maybe 2 coffee and one lunch break. Still,  it played perfectly off the inspiration our team had been feeling from the previous day’s meeting. Our numbers are bad, so how do we fix it? 8 hours of intensive AIESEC selling tips and we knew exactly how. It was exactly what I needed to finally be able to get down and dirty in AIESEC Business Development (my job is to find companies that want to partner with AIESEC, that is, bring in foreign interns). We also got to do a mock cold call and sales meeting, something I’ve been wanting to do since joining AIESEC last year. Our team was pumped afterwards. Danny, Alex and I couldn’t stop gushing about how we “got this shit. We’re gonna Just Fucking Do It.” Then it was time to party. 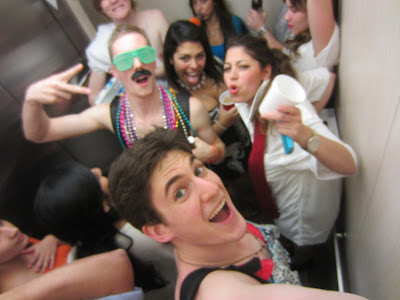 We take these sorts of things seriously.

The theme was come as you aren’t. Alex and I came as women. Great night. Lots of dancing and stuff. Yep.

Final day came and it was actually pretty sad. I had made a lot of friends, and the environment of living in a hotel all together had created a sort of fun little AIESEC community that I would miss. We had little optional “AIESEC University” classes, and I attended one about leadership within AIESEC. Something that’s been bugging me is that my ability to take a leadership position in AIESEC is somewhat impossible at this point because of the way leadership terms work. For example, if I wanted to be VP of my current team, I would be elected next January, with my term lasting until January 2014. I graduate in May of 2013. So, I’m sort of in limbo. It’s very sad, and makes me wish I had gotten my shit together well before halfway through my sophomore year. However, I do draw hope from the fact that it is possible to actually work for AIESEC for a year as a member of a National Committee. One such member told me that he his work for his local team had been so successful that he was invited to become a member of a National Committee of several countries.

But since I’m graduating next May, there’s not much time left to make a name for myself in AIESEC…. the thought depressed me, along with the also recent train of thought I’ve been having about my major. I’ll delve into this more in the next post. This one has gotten long enough. Next post will be in sooner than a month, since lots of fun stuff has been happening.