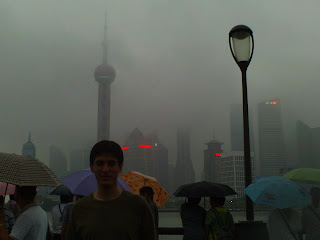 Last weekend, Alex, Chen, and I went to Shanghai. We were planning on going by train, but a somewhat problematic AIESECer took an executive approach and purchased our bus tickets for us, then demanded 100RMB each from us. Somewhat frustrating, but my main goal was to get to Shanghai, so in the end, moot.

The drive there was uneventful. Bus rows have sets of 2 seats, and Alex and Chen decided to delegate me to be on my own. I joked that I would probably get to sit next to a super hot Chinese chick, and as the words left my lips and Alex snorted his derision, a super hot Chinese chick got onto the bus, looked at her ticket, and sat next to me. I smirked at Alex, and upon initiating conversation, found that she spoke pretty good English. However, in China, it is often difficult to find an interesting conversational partner, not only because of the language barrier, but also, frankly, Chinese students can be quite boring. I would say 80% of the responses I get to questions are the same - Favorite sport? “Badminton and ping-pong.” Major? “Finance/Business.” Aspirations? “None.” Travel much? “Sujo/Sutran/Beijing.” I try to pull something about, but honestly, most Chinese students do the same thing as everyone else - study their asses off for the University Entrance Exam. There are exceptions, obviously, like my homestay brother Lance, who has been everywhere from Japan to Russia, and is studying Literature in New Mexico next semester (he’s crashing in Houston for a few days, who wants to America him with me?) and Develoop, who is just straight awesome. Still, it means talking to random students is often a drag, and so after a few pointless conversation starters, I just turned to my DS.

Upon arriving in Shanghai, the plan was to rendezvous with John White, my VP of Business Development, who is teaching about environmentalism in the city and has his own apartment that he said we could crash in.  Thing is, Shanghai is big. In the words of John, “Dog, it’s F’n huge.” It is, indeed, F’n huge. It took us 45 minutes by subway to get from the bus station on the southeast side to the northeast side of the city. The whole way, it was residential apartment blocks, as far as the eye can see. It’s unbelievable just how many people live in Shanghai.

We met up with John and his roomate Michelle at a local restaurant (“We’re outside, just look for the only black guy in the city.") The waiter was a Korean guy that Michelle and John were in love with. He brought us a bottle of Chinese rice wine, which is a milky sort of drink that tastes almost like aloe, but is extremely alcoholic, and is drunk from a bowl. So we accidentally got a LITTLE drunk (this is uncommon, I swear.) The fact that I had taken an adderall that morning only exacerbated the issue, and hence the utter lack of pictures from that night. In any case, we went around different pubs in the area, ranging from a high class bar on the side of a skyscraper, to a tiny dance club set into the French Quarter. We also met a random guy from Reddit.com who is a game developer from California that has been working in Shanghai for a year.

Alex slammed an entire thing of whiskey (which was delicious, John always hooks it up) and I was reeling from the combination of amphetamine and alcohol, so the next morning was a very slow start. Unfortunately (or perhaps fortunately) John’s shower only worked in ice-cold mode, with the occasional boiling-hot mode every few minutes, so I was woken up in a hurry. With a little help from Ellie, we managed to get out the door. We wandered around looking for a bakery to score breakfast at, when I stumbled upon an enormous market, hidden behind a few restaurants. It was enormous, and absolutely hidden from sight. We bought some ZongZu (which is becoming a favorite Chinese food of mine) and headed to a garden.

Chinese gardens have been some of the most impressive things to me here. I will devote a post to them later, but for now, I can say that it was utterly relaxing and beautiful. They have these fantastic rock sculptures, which I have recently learned they call “fake mountains,” that are great to climb all over and through. Not to mention the architecture and art, which is often ancient and very cool to see. I had a lot of contemplation time, and am trying to do the whole “find myself whilst traveling” thing. For some reason, though, I found myself very distracted in Shanghai, and it wasn’t until my trip to Suzhou three weeks later (today - I’m behind on the blog, so kill me) that I think real discoveries have been made. In any case, the structures are great to climb on, but Chinese people get pretty freaked out when you go all spider-man on their parks.

The shopping districts of Shanghai are awesomely illegitimate. A guy walked up to me and asked me if I wanted to buy a watch. When I said “yea,” some other guy appeared out of nowhere and said “follow me.” I was already uninterested - I had no cash and didn’t have any experience bargaining yet - however, I followed the two through shops and alleys into an alley-way hovel that was brightly lit, clean, and filled with what must have been stolen or ghost-shifted Gucci purses, watches of the most expensive Swiss brands, an all manner of apple products. They were visibly upset when I told them I didn’t have money and was only looking, which only made my exeunt all the more rapid.

We met up with the people from Sisu university that we had met in Nanjing at an enormous mall (the entire top floor was a gym that we just walked into accidentally - I wondered if I could use the equipment for free without anyone noticing), in which I purchased a Chinese learning book. After much catching up, we headed to the Shanghai museum, which features art and artifacts from the earliest ages of China right up to the Qing dynasty period. Threw some pics up, some of the art is really good, especially the porcelain and jade.

Walking down the street, a lot of people asked me if I wanted a “lady massage.” Easy to turn down, but I’ve noticed something about rejecting merchants. Here, merchants don’t just call out to me, they actively follow me and keep talking to me. At first, I got annoyed and angry at them, as it is not how I’m used to salesmen operating. However, that only made them that much more annoying, and mocking. I’ve found, though, that if you smile and laugh with them, they smile too. One lady asked me if I wanted a watch. I said no, and she asked if I wanted an ipod. Again, no. Then, her voice got real low and secretive, and she asked me if I wanted a lady massage. I was so shocked at her shift in tone that I laughed out loud, and she laughed to and smacked me with her little magazine thing, as if completely aware of the ridiculousness of what she was selling. From then on, I tried laughing with the salesmen and pimps, and they all laughed back. It can be grungy here, but they all seem aware of the hilarity of it. Sometimes, I feel like everyone I deal with is permanently stuck at age 12. I’ve talked to other westerners about it, and they’ve felt the same way. I’ll develop this idea more, but it’s only become stronger as I talk and work with more Chinese people, of differing ages and occupations. On the one hand, it’s immature, on the other hand, it’s innocent and happy.

Not much more really happened. Saw the sights and experienced the vibe. I hope to go back. John was so utterly happy in Shanghai. He had independence where I was ruled by the whims of my AIESEC LC in Ningbo, which is something that has been frustrating me greatly. When he said “I’m going to come back here, man,” I found myself shocked. I realized that as much as I love China, I hadn’t even considered coming back to work again. I have become determined to make the most out of every second, despite the setbacks and challenges that arise.

Take a look at the “Shanghai” folder in flicker. Notice that my hands are often in my pocket. Pickpocketing is a huge problem in Shanghai. Michelle was once walking around with her headphones plugged into her phone, listening to music, when suddenly the music stopped. She felt for her phone to see why, and found it had disappeared. She looked around and there was nobody around.

They jacked her phone.

While she was listening to music on it.

Give the Chinese a single task to do and they’ll do that task so well it’s scary.