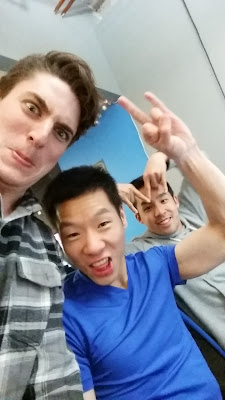 Life at Makersquare has fairly normalized. There’s not much in the way of ego-shattering surprises anymore, though every moment has stayed fresh. Our cohort has settled into a comfortable familiarity, the short time we’ve known eachother counteracted by the fact that we spend nearly every minute of every day together.

Saturdays we’re off at 530, which one would expect means a mad rush for the door to do, god, anything but hang out at the office we’re planted in for >60 hours a week. Yet, people keep on coding, grab beers, pull out the cards, and hang out. What might have been dreary has become a sort of second home, or in my case even more of a home than anywhere else in California. Sometimes we’ll throw a movie or tv show up on a projector, sometimes we’ll kick back and LAN some minecraft, sometime we’ll crack beers in the kitchen and play bananagrams. It makes the Makersquare office cozy, a place where not only do we smoosh as much Javascript into our heads as we can, but also a place we can look forward to coming to. I’ve learned to associate the sight of the building in the morning with the taste of free bagels, and have already Pavlov’d myself into not feeling hungry until I walk onto Mission street, 2 hours after I’ve woken up.

We get 2 hour lunches Tue, Thu, and Sat, which is ostentatiously for working out. By some miracle of discipline, I’ve managed to make it to the gym for each of those days, making the last few weeks the most consistent of my life. I believe these workouts are a critical component of my ability to not only stay positive and on my game here, but to succeed at all. I’m not sure what would happen if I was struck with a bout of that weird depressive sleepiness I get when I don’t have any physical activity in my life, but I can’t imagine it would be conducive to an education. Having it in the middle of the day is just icing on the cake. Biking four miles a day uphill both ways (it seems) certainly doesn’t hurt, either.

I don’t get much in the way of extra coding time, as my commute has me leaving the house at 7 and getting here at as late as 830, and getting home between 9 and 10 depending on the mood of the MUNI. So far it hasn’t seemed to be much of an issue, but with a cumulative assessment coming up, I’m striking around for times I can squeeze in just a bit more work. So far all my free time has been filled with trying to figure out the new Google Cloud nonsense (how to Node.js? please send help) and catching up with the new season of House of Cards.

It’s been boxed lunches every day, which probably is good for my health or whatever, but mostly is friendly to my wallet. It’s been a lot of whole chickens thrown in the oven for about an hour, shredded, and added to some broccoli. I’ll cook better when I’ve got the time and money. I have been dabbling in baking bread, which I can tell will quickly become an addiction once I have the time to feed it.

This week has been a lot of backend request handling, locking down our understanding of asynchronous coding, and databases.