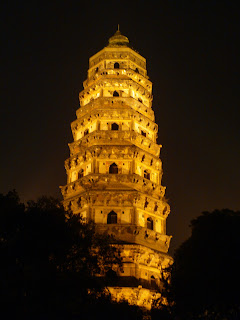 Things are getting out of order on this blog. Oh well.

So, a few weeks ago (when Alex was still in town, and I was doing the Red Wings project), Meteor, Nikunj, Kriggers, and I decided to go to Suzhou in the middle of the week. Looking back, I will miss the spontaneity of such trips. The conversation two days previous to the trip had gone: “Hey wanna go to Suzhou?” “Hell yes.” “Ok go with Kriggers on Wednesday.”

Suzhou is a fairly pretty city. Its air is certainly cleaner, and it is fairly natural. However, for some reason, people in the city use their car horns far more than they do in Ningbo, Shanghai, or Nanjing, which was really getting on my nerves. It made for a somewhat stressful atmosphere at times. Despite everything, though, when we arrived at the hostel, I fell in love with the place. It was built into a collection of old China-style buildings, with gorgeous Chinese-style decorations. It was clearly student run, with a fantastic open-air lounge with a glass roof. Vines and bamboo abound, and some of the seats were swings hanging from the ceiling. They had an extensive DVD collection and a more enclosed room filled with books, that had two little hovels with flat screens and a DVD player each. The rooms themselves were, while small, very clean, and we were provided with clean sheets each night. There was also a guitar with a broken e-string, and a dog.

Nikunj had left us at this point to go be with his UK friend, so Kriggers, Meteor and I decided to hit the town. We wandered around exploring, buying random food along the way (“Oh look, a bakery!” had become a sort of catchphrase) until we stumbled upon a market. It was then, when I decided to check on my account, that I discovered I had 400RMB left, or about 60US. This soured my mood considerably, as it meant I had, in 1.5 months, spent about 400US. I remain determined to not spoil my trip by being in a foul mood, so I cheered up as best as I could and enjoyed the night. We wandered around an enormous market, in which I discovered the latest trend in Chinese store-front advertising: clapping loudly. The entire market street was lined with girls standing in front of shops, clapping. It was surreal. I also saw a great example of a strange phenomenon I’ve been noticing in China: the prevalence of perfect competition. “Terrible for the business owners,” I said to Meteor when I noticed an entire line of souvenir shops selling wigs. “True, but great for the consumer!” she replied. Here, an entire row of, say, Light stores will spring up right next to eachother. On the one hand, this means you know exactly where to go if you want to buy a light, on the other, those stores must all share the profit for lights in the area. If a light shop had opened up elsewhere, then each store would make far more profit in each of their respective areas.

When we had first arrived, all of AIESEC was freaking out about a talent show on the upcoming Friday. This talent show had become infamous between me and Alex, as we became more and more misinformed about just what we were supposed to be doing. The weeks leading up to it, our responsibilities for the talent show had changed from participation to being the organizers. Yet, we didn’t even know how long the thing was, and whether or not it was just AIESEC EP’s participating. Right before the trip to Suzhou, I managed to figure out from Kyle that all of us foreigners had to fit all of our shows into one 5 minute segment. So, all our planned events (Alex’s dance, Adam and Madaleine’s poetry, my song and guitar playing) were somehow supposed to be condensed into 5 minutes. I got fed up and decided to chunk deuce and head to Suzhou on Wednesday, “promising” Kyle I’d be back by Friday to, I dunno, do something on stage. That night, I got a call from Chendra informing me that the manager of the community didn’t need me that Friday, and I could enjoy Suzhou all weekend if it so pleased me. So, I decided to go ahead and do just that. The company was pretty nice, after all.

Kriggers, Meteor, and I had all managed to get a room in the hostel together, which meant we got to wake up and enjoy the morning together, stretching stiff joints from the typically hard Chinese-style beds (Meteor, of course, was as sprightly as ever). It was good to have a somewhat slower morning after being rushed around back in Ningbo so much. We lounged over to a restaurant to get breakfast and then headed to Tiger Hill.

Tiger hill is a smallish mountain, on the top of which is a fantastic and old pagoda. There’s lots of beautiful scenes all around. The Chinese have an idea of scenery as paintings, so, there are places all over Tiger Mountain where there’s a recommended direction to look, and you’ll see a scene that looks like a beautiful painting. Trees, architecture, and windows are all used to frame the “paintings.” There’s also a lot of historically morbid locations, like the “thousand man rock,” where apparently 1,000 soldiers were poisoned or something. There was also the “thousand sword well,” where a thousand different soldiers threw their weapons at the end of a war. Many things in China are labeled as “thousand ______.”

So, we wandered around, enjoying the various scenery, until about 3. At that point, Nikunj called and asked what we wanted to do at night. He said he was going to go to some clubs. I was attracted to the idea, but had jokingly suggested to Meteor that we should hide somewhere so we can have Tiger Hill to ourselves all night. It seemed like a romantic idea, and so I was partially serious, but it was still shocking to hear her readily agree to it. “I want to see how it looks in the moonlight,” she said, “like it’s supposed to be.” We hung around for quite a bit longer. When I asked her if she was sure, or if she would rather go out on the town with Nikunj, she said “We can go out in any city. This is unique.” I realized that it would indeed be unique to hang around a many hundreds of year old monastery hours after closing time. My only concern was getting out undetected.

It turned out to be both fantastic and terrifying. We had to wait quite a while for the sun to go down, and so sat on the side of a river and talked for nearly three hours. Finally, the sun began to set, and so we snuck back into the monastery itself. It was pretty exhilarating, even though I’m pretty sure we were alone on that mountain. After wandering around, I started to get a bit freaked out. My imagination is a little overactive, and so, while I saw nothing strange, I knew all it would take is one strange thing to throw us both into utter terror. It was somewhat surreal to be aware that I was so close to feeling only the hopeless terror I feel in nightmares. All it would take is a shadowy figure stepping out of the darkness, or an ear-piercing scream, or a rock falling down a wall.

We tried to find a way out that wasn’t the main entrance, but the whole mountain is surrounded by a river,and so we had to try to creep out the huge main entrance unseen. Getting there was fine, but we were blocked by an enormous gate. As we stood there, a woman on the other side started yelling at us. I told Meteor to pretend to not speak Chinese, since I have discovered that foreigners can pretty much get away with anything. So, some guy opened a pretty hidden door and led us out, berating us in Chinese. We still got out scotch-free.

It was a very cool night, and China is very active in the last hours before midnight, so we decided to just walk all the way back to our hostel. It was very relaxing, and gave me time to reflect on all the things I had seen and done here. Still, looking back at my journal (I’m writing this several weeks after the trip to Suzhou), I know I have changed between then and now. It will be interesting to see how I see things when I get back to the States with such a changed perception.

It was sad to leave this guy behind. The next day, we packed up our stuff and headed out to what is apparently one of the four most beautiful gardens in China. Honestly, it was my least favorite garden, however, it was still absolutely enjoyable. It was a lot more planned than the other ones, with a clear focus on herding tourists around to look at all the nice things. The other gardens had still retained their original purpose: slow enjoyment. I still had a good time, especially when we got to see some of the silk art that Suzhou is famous for.