Tammy and I went to Taipei, Taiwan this year.

I used to live there so for me it was a return to one of more formative locations of my life. I’ve been wanting to show it off for years. I’ve also been wanting to live out my dream of motorcycling through the incredible mountain roads in Taiwan.

Furthermore, I’d been on keto for some time, and my hankering for milk tea and small Asian bakeries was insatiable.

Renting a motorcycle in Taiwan, at least from the agency we went with, requires an international driver’s license. AAA provides this. The important thing for motorcyclists is getting the license stamped as a “motorcycle license,” which when we did it meant having a stamp on the “A” portions of all the various languages. Note though that it wasn’t good enough to have it stamped in just one, the shop wanted it stamped in all of them. So, when you go to AAA, have them stamp each and every “A” in that little book.

Taiwan is tricky when it comes to foreigners on motorcycles. First off, everyone assumes you want a white plate (under 120cc) scooter, because they’re used to young English teachers that don’t have foreign motorcycle licenses. Then, the law itself is very vague (or maybe it isn’t, and the enforcement is so vague nobody is quite sure what the law actually is), so some shops are happy to put you on the back of a yellow (>120, <500cc) or red (>500cc) bike, others insist it’s completely illegal.

So, you’ve got to go to the enthusiasts, and convince them you know wtf you’re doing. Luckily I had an old acquaintance that set us up with this motorcycle rental shop (google maps link) on the East side of Taipei. These guys were legit, and had a HUGE selection of bikes. I went with a Duke 390 and Tammy picked a Ninja 350. All we had to do was message them on Facebook, choose a bike from their [images page](https://www.facebook.com/TownTire/photos/a.2449955768404050/2449961908403436/?type=3&theater** and let them know the dates we wanted it. They requested we give them a Taiwan address in case we get any tickets, but were cool with the address being a hotel. Unfortunately, they didn’t offer insurance.

Cost was cheap as hell. There was about a $1,600USD deposit on each bike, and then for four days of rental each bike was about $200USD.

We landed at about 5:00am local time, and after and hour bus ride ended up in a very, very empty Taipei. Couldn’t even find a place to get breakfast, so we fastracked to our hotel. Within the first hour, though, we got to experience some quintessential Taiwan, with a very weird movie on display for us during our bus ride:

Our first hotel was in my old haunt, near Tonghua nightmarket. Hilariously, it was next door to Carnegies, by far and away the saddest foreigner bar in the entire country. We dropped our crap off, changed into some shorts, and rolled out. At this point, it’s only about 8:30am.

Luckily we found a breakfast place I was mildly familiar with, it being a go-to before an early morning hike when I lived in Taiwan. We got our first taste of Taiwan food! Struggled a bit through the menu and thoroughly confused the wait staff, but ended up with a couple decent enough plates: 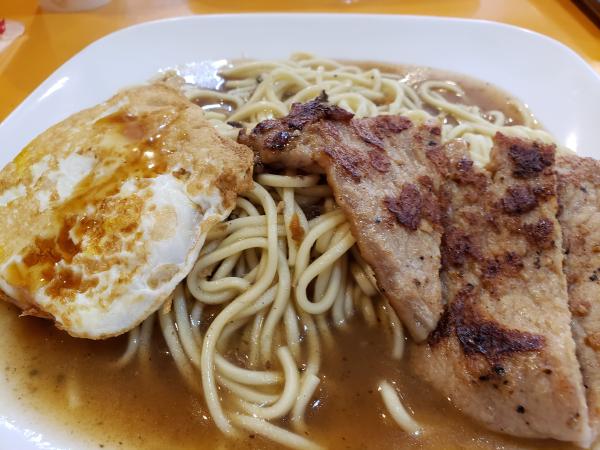 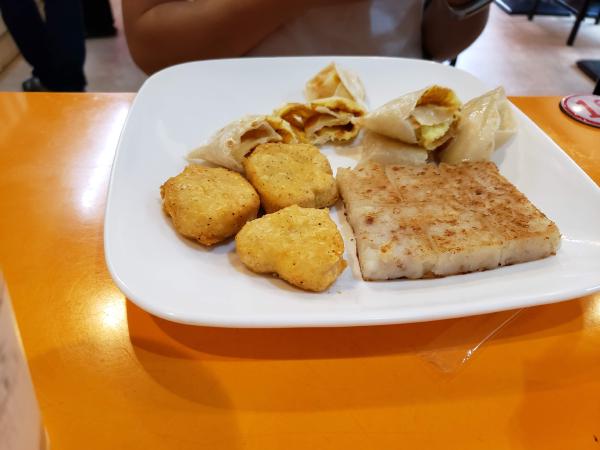 From there, it was off to the Tonghua daymarket. 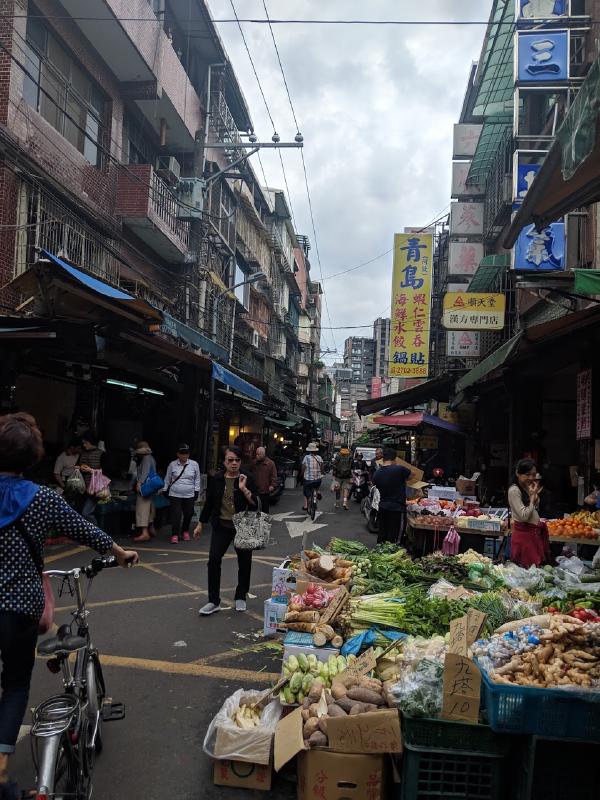 At this point it’s about 9am. We’re flagging, and the market is overwhelming. You must push your way through massive crowds of people while hawkers shout at you about fish, vegetables, mushrooms, eggs. Occasionally, a scooter will squeeze its way through the crowds, miraculously avoiding people’s feet.

We pushed through. I was on a mission. I hadn’t had a meaningful amount of carbohydrates in months, part of a keto diet I had been on to allow me to do whatever I wanted when it came to food on this trip. We needed to find carbs. Specifically, tapioca milk tea, a drink Taiwan had invented that has taken the world, and my heart, by storm.

So we endured the crowds, hunting for a good enough milk tea place. Nothing is open, though. Still too early for the shops that cater to Taiwanese of our age.

We staved off death by keto via a little bun from a woman I used to buy breakfast from every morning. 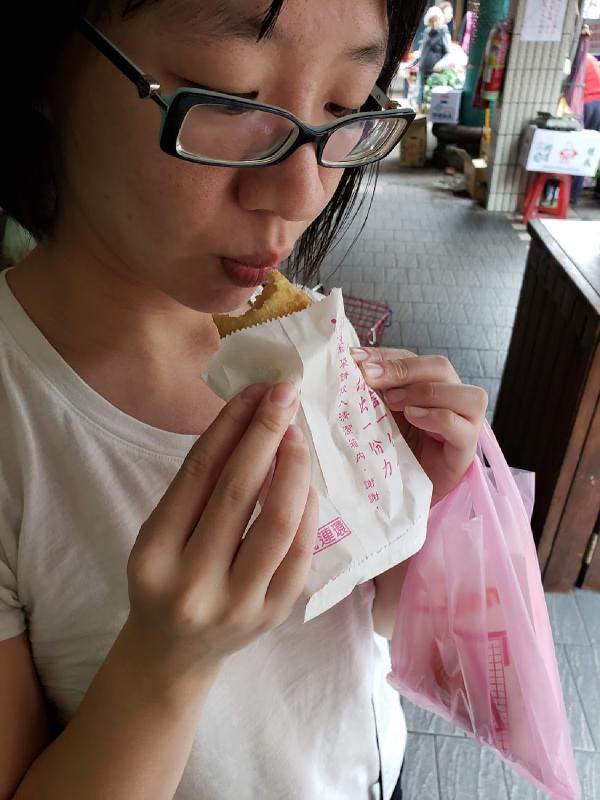 It’s deep fried and filled with molten-temperature meat or chives. Next to the lady had been my favorite custard-pastry guy, but he wasn’t in, the cart pushed to the side. I remember he always had worked whatever hours he felt like.

Finally we came upon a motherlode: a Taiwanese bakery. 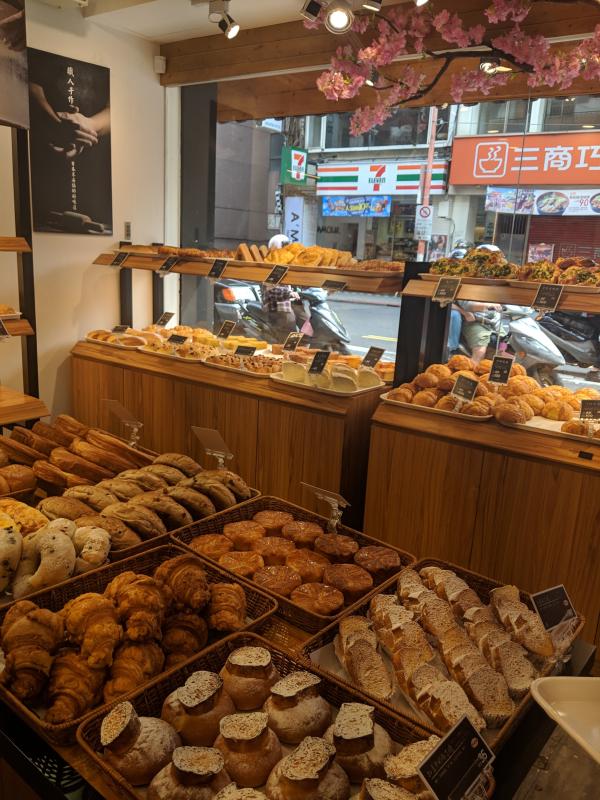 Tammy and I loved these things in Japan and always lament that they aren’t nearly as popular in the US. Even if you can find one here, it pales in comparison to the freshness, variety, and obviously cost that you can get in Asia. Taiwan steps these bakeries up, easily equaling or even surpassing their Japanese counterparts.

Predictably, we bought out nearly the whole shop, and continued our hunt for boba. We find a 50C near Tonghua Night Market, dutifully stand in line, my hands sweating at this point, but they’re out of boba! The lady was completely unsympathetic. She had an attitude of “I care not for your suffering, you’re not the first to seek boba from me and fail, begone.” Heartbreaking. Tammy got a tea and I got grumpy. 10am at this point, no boba, I settled in to a sort of bobaless fugue state.

We killed time by wandering towards and around Taipei 101, stopping in parks along the way to snack on our backpack full of goodies. Particular highlights included seeing the Monkey King wandering around: 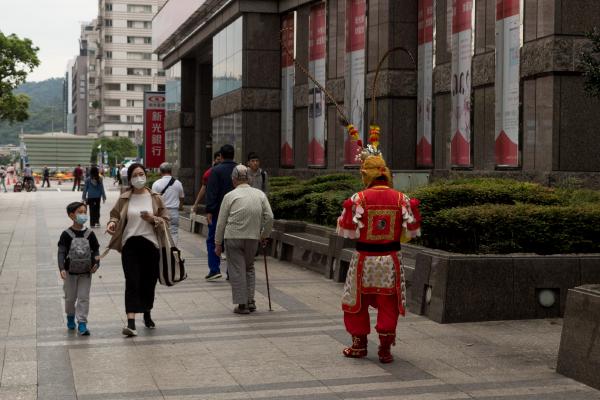 Saw a couple strange things as we wandered around Taipei 101 (with the general goal of finding the Coldstone Creamery that Tim and I had had spiritual experiences at when I had lived in Taiwan). First, the Krispy Kreme didn’t have a line, which is an absurd blasphemy, considering that I had never seen it not have a line around the block when they installed it 2014. Also, outside a closed Nike dealer, an extremely long line of the most various ages I’d ever seen. Half the line was the expected millennial in street clothes, the other was octogenarian or older. Later, we found this was because people would hire the old folks to stand in line for them, so they could get a shot and buying fresh sneaker drops.

We also saw this butt guy: 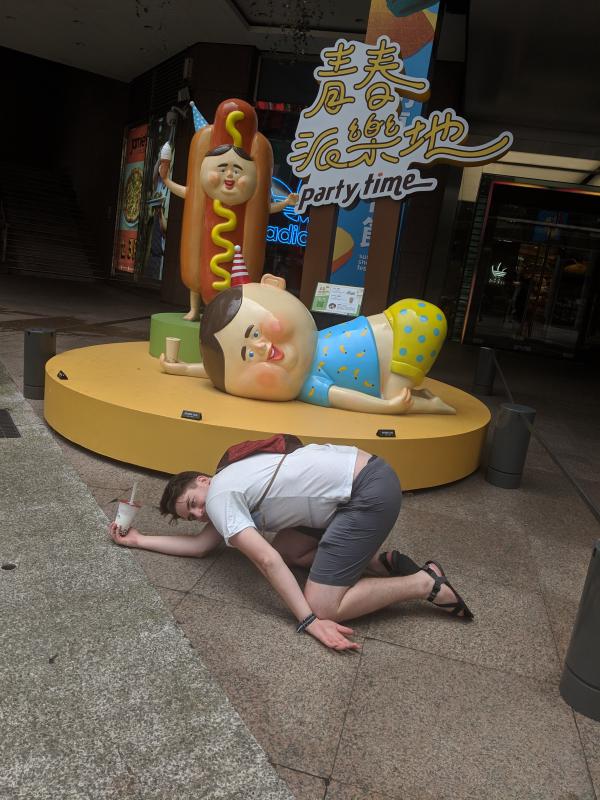 Finally, we found some milk tea in the basement of one of the Taipei 101 malls. I start making short work of it, but am pulled out of my reverie by a very dolled up young Taiwanese woman speaking quickly to me in Mandarin. Around mouthfuls of boba I try to answer her questions - something about a camera, taking pictures, ok, this is a situation I’m familiar with, she wants a picture of the white guy, but wait, this is Taipei, Taiwanese people don’t give a shit if you’re white, at least not enough to take a picture. As I’m trying to figure out what’s going on while still pulling myself out of a boba induced carb high, I shoot a boba from my mouth straight into my hand. She definitely saw this, but didn’t bat an eye, continuing to blabber on to, I realize, ask to take a picture of me drinking boba, for some reason. But she is definitely concerned, because a boba has been fired from my mouth and there’s no way she knew where it ended up. She didn’t know I was holding it in my now sweaty hand because I couldn’t figure out where the fuck to put it, and how I was going to handle a phone if my other hand was holding boba. I shoot glances at Tammy, trying to telepathically beg for her help, but she is busy doing the same to me, only she is trying to tell me that I have a boba in my hand by not-entirely-subtly making eyes at that hand. As if I didn’t know. The Taiwanese girl has her phone out and is taking a picture of me, so I smile and try to keep the mouth of tea I just drank from spilling down my chin like cold drool ( why did I take another sip in the middle of this drama?! because I am Caleb Rogers and I am addicted to Boba Milk Tea). I panic, and stuff the boba casually into my pocket. The woman thanks us, and sits down to order her own. We get the hell out of dodge. Tammy asks me where the boba went, and I pull it out of my pocket. Shame.

For the first time in my life I actually went to the top of Taipei 101. I had never done it when I lived in Taiwan, probably because it seemed too touristy, and a waste of money. Had pretty fantastic views, though, so I guess I missed out. There’s also a great informational section surrounding the massive ball at the top of Taipei 101 that helps stabilize it during strong winds (such as during a typhoon) or during earthquakes. 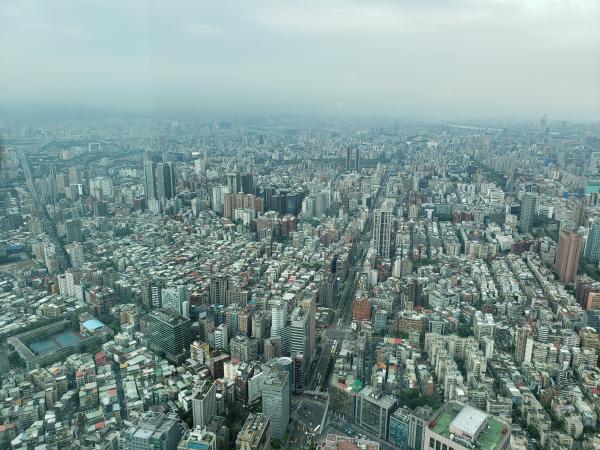 They also had an exhibit on indigenous Taiwanese culture, with this dope ass dress featured from an indigenous artist. (hugo has rotated the image for some reason and I am too lazy to fix it for now.) 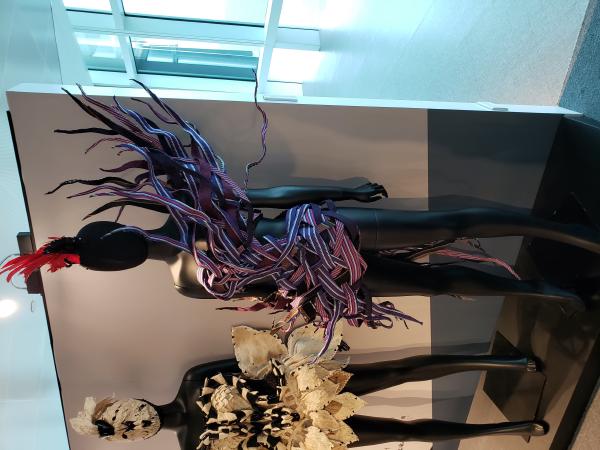 While at the top of Taipei 101, we met a really cool older couple that took our picture for us, Bruce and Donna. They were working a job in Osaka, their first time every living out of the country, and they had taken the job right on the edge of retirement. They had really cool perspectives on life, having already gone through pretty much all there is to do (kids, jobs, travel) except for retirement. We spent the night getting dinner and drinks with them, having a really good time.

At the end of the night, we wandered back to the hotel, as always on the hunt for late night snacks. This night we found a vending machine for these amazing little circle cake things that Tammy and I love: 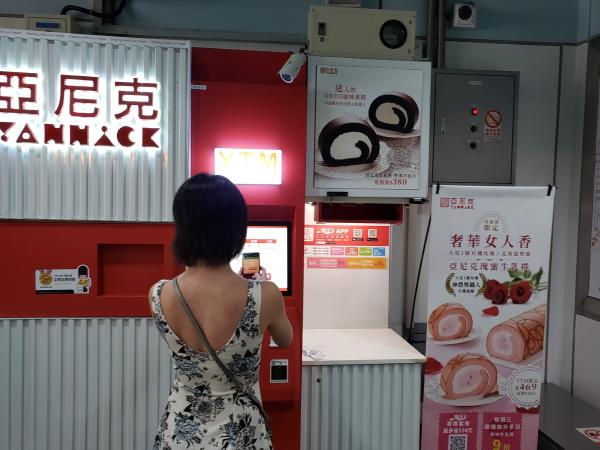 The cake even came out cold :D

We started our day two out strong by hitting an excellent beef noodle restaurant next to my old house. 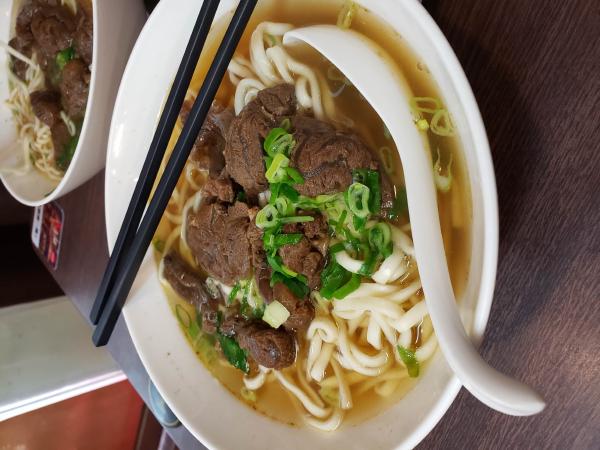 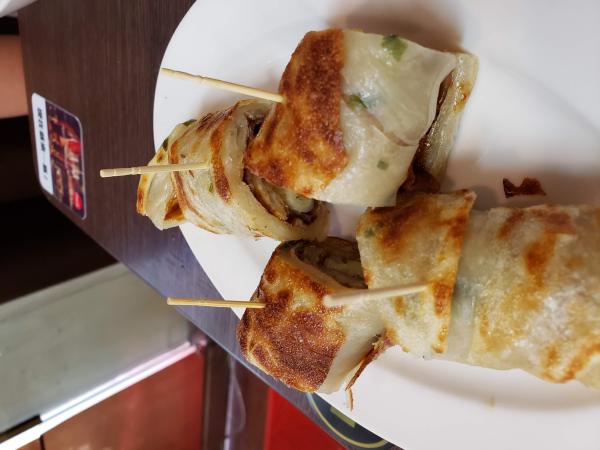