The Nintendo Switch is the result of Nintendo fucking around with weird ass consoles for like three generations. They’ve finally figured it out.

You might think “yea it’s good, but it’s just another console.”

No. So much more.

I’ve got a couple unfinished, unpublished blog posts on my endless quest to find the ultimate traveler’s gaming machine. I tried emulator combinations on a surface, on my laptop, on an android tablet, on my phone. I tried wonky hookups with HDMI and USB-C cables. Portable controllers, etc. I was churning through combinations. I wanted something that let me play a bunch of old and new games. I wanted to be able to play it on the plane. I wanted to be able to kick it in the hotel room and hook it to the big screen when I or Tammy and I together wanted to just relax. Even better if I can hook it up as a group entertainment device. You wouldn’t believe the hacky solutions I had. The process itself was more fun than actually using my given combination on a trip.

Then the Nintendo had to go and ruin it by coming out with the Switch.

To start, some of the best Nintendo games of history are this thing. Breath of the Wild is a masterpiece my girlfriend and I have collectively sunk probably 300 hours of gameplay into. Mario Odyssey is endlessly playable. Pokemon is addicting beyond belief. Luigi’s Masion is a blast. I couldn’t have gotten this on any of my funky hacky devices. Oh, Smash Bros.

Then we get into the old school stuff. They got NES and SNES games on it, some of the best, and they have weird-ass modes you can activate that are akin to any given ROM emulator’s cheat mode. It’s not as robust as some of my other solutions, which allowed me to play literally every n64, ps2, ps1, GBA, GBC, GC, NES, SNES, and SEGA game ever made. But, it covers the necessities, in the form of old Zeldas and Marios.

And then the craziest thing - for the first time in history, as far as I’m aware, Nintendo is allowing indie developers to publish on its platform. So you’re getting Shovelknight, you’re getting Stardew Valley. Celeste, Cuphead, Hotline Miami, Enter the Gungeon, Broforce, Downwell, Hollow Knight, Owl Boy. All those fantastic 2d games that my more low-powered contraptions had on them since they couldn’t run more intense games.

And even WILDER is that some of the best AAA games of the last 10 years or so are coming to the switch in drips and drabs. It feels dirty sometime to play them on something less than my monster PC, but it’s something that wasn’t available to me on any of my hacky contraptions, not even my full blown laptops. Witcher 3, DOOM, Skyrim, Wolfenstein, Divinity Original Sin: 2. They all nuke the battery in about two hours, and are super hard to play on the tiny screen, but hook it up to the big screen (we’ll get to that) and it’s a dream.

Best part - the Switch has expandable storage with a microSD card, and you can download games to it. This was what made the DS line worth having, by getting an R4 card and filling it to the brim with games. Who wants to carry around an assload of easy to lose plastic carts? Nah. If Nintendo hadn’t done this, I would have hacked the Switch to allow me to do so. Now they’re actually getting paid for the games instead. Smart move. The Steam strategy.

This was one of the big pitches of the Switch, that you can pop it off your little (shitty) stand thing and take it along with you. It’s a good pitch and it works. I’ve no problem playing it on the plane, either holding it in my hands or popping the little (shitty) kickstand and dropping it on the tray table. Good thing about that is I can relax my hands on my lap or by my side, since switch controllers don’t need to be attached at the middle. I’ve loved this since the Wii. Laziest way in the world to game.

It’s not all golden, though. There’s some dumbass design flaws. For one, the little kickstand on the back is crappy. It’s either engaged, or not. There’s no tilt adjudgement. It’s also only on one side, so the Switch can fall over. Also, someone (presumably an ex-Apple engineer) decided to put the charging port on the bottom, so it’s literally impossible to charge while playing in kickstand mode, and it’s annoying to do so when it’s in your hands cause the cable is all up in your crotch.

This where it gets good. So I can play videogames on the plane, whatever, nothing new. Could do that on my DS, on my phone. Nothing new. Nah, best thing about the Switch is that with the addition of a couple simple components, I can turn my hotel room into a dope little gaming dungeon. Yea yea go enjoy the country you’re visiting whatever, sometimes you just wanna kick it after a long day and wander Hyrule.

So, out of the box, the Switch is garbage at this. The dock is not at all portable and is an unwieldy piece of plastic. As of writing they offer no portable docking solution. Luckily, intrepid Taiwanese engineers exist to fill the gaps.

That little device basically functions as a switch doc. Originally I was going to buy and extra dock and rip it apart to get out the electronics that I need, turns out Taiwan beat me to it. Also, switch docks are like 120$ or something stupid lmao.

So, take that, plug the USB charger into it, plug the HDMI cable from it to your TV, plug the USB-C male end into the Switch, done. Sometimes you gotta fiddle with the order in which things are plugged to get it working, but it’s great.

With that thing, I can kick it and game on the big screen, play something with Tammy, or add yet another thing to my hotel room party space (Broforce, anyone?).

It’s not perfect. The Switch USB-C doesn’t follow the USB-C protocol to the letter, so you gotta get splitters like the above made specifically for the Switch. Furthermore, at least once in the past, Nintendo has released a firmware update that rendered my old splitter useless, a nasty surprise on a trip. Finally, those splitters don’t really work with anything other than the Switch - sometimes I can get it to work with my phone, but it’s iffy. But, they’re small, so whatever.

Below is some pics from us enjoying our little camp we set up in our hotel rooms :) 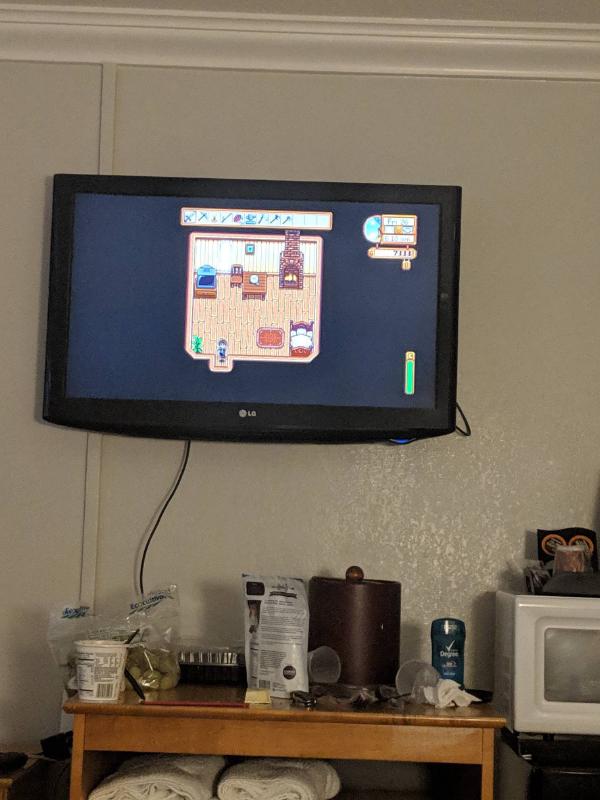 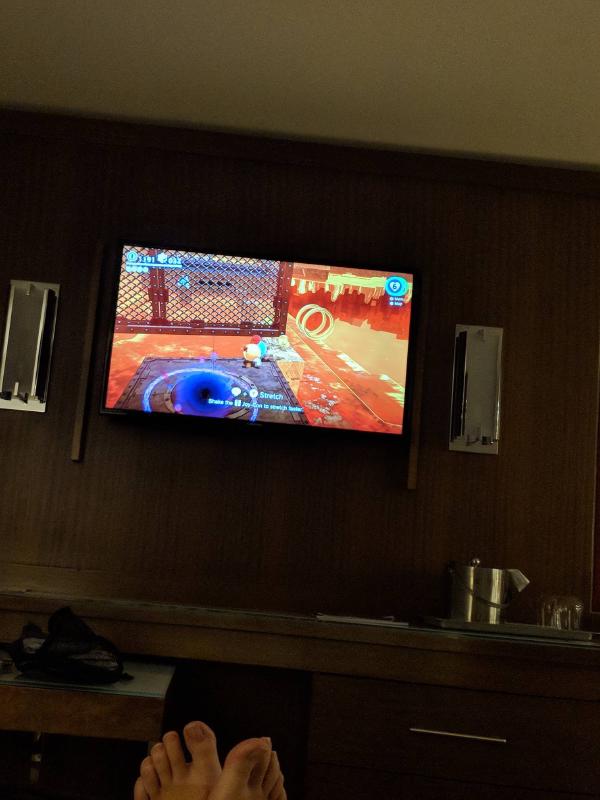 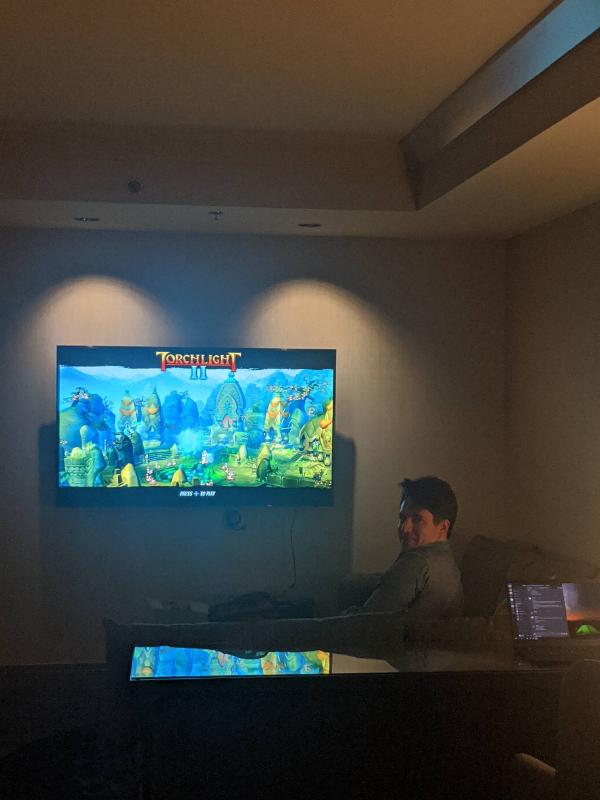