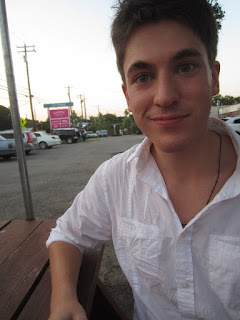 I think that picture define’s my mood over the past two weeks pretty well. Or maybe one week, really, is more accurate. I went from lazy summer mode, idly studying Japanese and browsing Khan Academy videos, to going on an AIESEC camping trip and then driving to Austin with Steven Jordan (on the left), visiting from AIESEC Indiana. It didn’t exactly fly by, every moment was awesome and fun, but it was a lot less slow than derping around my house looking for something to do. It’s exactly what I want my life to be like all of the time, actually. 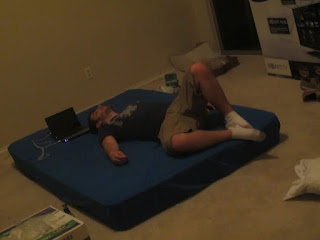 Tyson, on the other hand, can’t handle that kind of action. <3

The only problem is finding a way to do that in Houston. Having gone to Austin twice in the last month, I’ve decided it’s a guaranteed way to have fun. There’s some pretty good hiking and swimming out there, and if the green belt is any indication, there’s good climbing to be had in the area. There’s also the bar scene, which AIESEC ate right up. 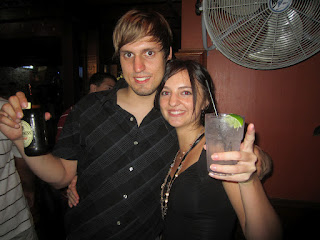 Carston is my favorite German exchange intern to go to bars with. He started Euro-dancing (clapping and shaking his booty) as soon as we walked into a place. At one point I lost him, walked up to two girls standing alone and asked them if they had seen a tall dancing German guy. This girl got excited and said she was German. So Carston saunters up, I introduce them, they speak in German (only after he pretends to be Dutch for a good 10 minutes), I lose him again. About an hour later I find him in this club (pic is after they turned the lights on at 2am), dancing by himself in that same euro-style while everybody around him rocked to dubstep. I asked him what happened to the German girl. He said she was very young. I asked how young. He said maybe 16. Does that look like a 16 year old to you? She didn’t sound like one to me. Germans, man. Germans.

Also, Tyson’s bought a house and I’m gonna be renting there for next year. Pretty pumped. It’s brand new, just build, huge backyard, and 5 miles off campus. So many adventures will be had. We still have room for a few roomates if anybody wants a part of that.

Also I just bought my ticket for Japan. It’s so shockingly hard to believe that I’m going to Japan that I think my brain has outright refused to believe it at all and so I’ve just been calmly browsing reddit, waiting for it to hit me.

Anyway, a lot of people have been asking how I nailed a cheap flight at such short notice for Japan. One thing that helped a lot is that the company is paying for the ticket back. Other than that, here are the resources I used:

http://flightfox.com/ : Pretty cool idea. You upload your desired itinerary and what you’re offering as a finder’s fee (average is like 20$, I offered 50$), and people post flights that they’ve found using whatever tricks they’ve learned over the years. You pick one, they walk you through it, you reward the finder’s fee.

And for trying to decide when to book, surprisingly, Bing’s travel search has a very powerful flight price predictor. According to reddit, it’s because they bought it off some lone programmer and integrated it into their site.